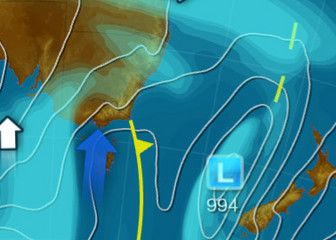 While Australia often has more extreme weather than New Zealand lately it’s not only been the other way around, but Australia has been quickly slipping into winter while northerlies here have helped create record May temperatures.

In the past week Melbourne had its coldest day of the year, snow is predicted for some south eastern parts of Australia as soon as tomorrow and now Canberra has just had their earliest frosts in almost four decades.

Canberra residents have woken up to six consecutive mornings of sub-zero temperatures, the longest frosty spell this early in the season since 1972, according to weatherzone.com.au.

The very cold mornings began last Thursday when it chilled to minus 1.8 degrees, since then each morning has been even colder, getting as cold as minus 4.0 on Friday morning, eight below average.

The bitterly cold starts to each day have all warmed up to the mid teens in the sunshine.

“We’ve had very dry air over the region since a cold front moved through the region mid last week. This dry air together with light winds and clear skies has allowed it to become cold overnight, making the start to each day very icy,” Weatherzone meteorologist Brett Dustchke said.

And the cold is not over yet.

“There’s at least another week’s worth of below-freezing mornings and days will also become chilly. It will struggle to warm past 10 degrees on both Wednesday and Thursday, the wind chill making it feel even colder,” Dutschke said.

“A strong cold front will arrive tonight bringing another burst of cold winds. Initially, the cold winds will be too strong for frost but they will bring a few showers. The wind will be so cold that small hail is possible and snow is a chance on the Brindabellas on Wednesday night.”