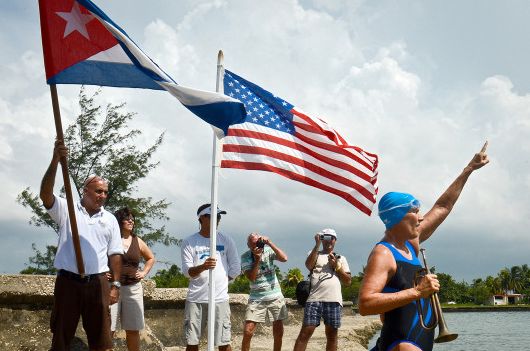 Jellyfish stings and a summer storm haven’t stopped Diana Nyad on her latest attempt to swim from Cuba to Florida, her crew said today.

A sudden squall blew the swimmer off course Sunday night, according to posts on Nyad’s blog.

“There is lots of lightning out there and the storm is blowing right on top of Diana,” a blog post said early today, adding that the swimmer was safe and “feeling strong.”

The weather was calm Monday and there were almost no jellyfish sightings overnight — a notable difference from the first night of her swim — according to Mark Sollinger, operations director for the swimmer.

In her first night on the water, Nyad was stung by jellyfish on her lips, forehead, hands and neck. Some stings were from box jellyfish, her blog said.

“She did the Diana Nyad thing and powered through it,” Sollinger told CNN on Monday morning.

After jumping into the waters off Havana, Cuba, on Saturday afternoon — a day earlier than originally planned — Nyad had swum nearly 34 statute miles as of Monday morning, putting in 50 strokes a minute, her blog reported.

The full distance to Key West, Florida, is just over 160kms, a trip expected to take Nyad 60 hours if the 62-year-old is successful in her attempt — her fourth.

She began the swim a day early because the water seemed to be “fantastic,” Nyad said at a news conference before beginning the swim. Her Xtreme Dream team “has been brainstorming and thinking, ‘We’ve got to get out there,'” she said.

Nyad’s first attempt to cross the Straits of Florida was in 1978, when rough seas left her battered, delirious and less than halfway toward her goal.

She returned to the effort twice last year. She was done in once by an 11-hour asthma attack and was later thwarted by box jellyfish stings.

She’s in the water without a shark cage, relying on electronic shark repellent and a team of divers to keep the predators away.

In the 1970s, Nyad won multiple swimming marathons and was one of the first women to swim around the island of Manhattan. She holds the world’s record for longest ocean swim — 102.5 miles from the island of Bimini in the Bahamas to Jupiter, Florida.

Nyad says she was 8 years old when she first dreamed about the possibility of swimming across the Straits of Florida. At the time, she was in Cuba on a trip from her home in Florida in the 1950s, before Fidel Castro led a Communist takeover in Cuba and its relations with the United States soured.

“I used to stand on the beach and I said to my mother, ‘I wonder if anybody could swim over there,'” Nyad recalled saying, while pointing to the Keys.

In her 60s, she says, she still feels “vital (and) powerful” — and definitely “not old.” A successful swim ideally will inspire people her age and older not to let their age hinder them, Nyad said.

“When I walk up on that shore in Florida, I want millions of those AARP sisters and brothers to look at me and say, ‘I’m going to go write that novel I thought it was too late to do. I’m going to go work in Africa on that farm that those people need help at. I’m going to adopt a child. It’s not too late, I can still live my dreams,'” she said.