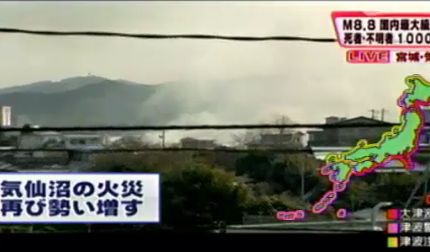 Japan’s nuclear agency has raised the severity rating of the disaster at the damaged Fukushima plant to level 5….two points short of the worst possible disaster and matching that of the 1979 Three Mile Island disaster.

Japan’s nuclear crisis remains serious, more than a week after the destructive earthquake and tsunami.

CNN’s Martin Savidge says ‘officials have now flown over the plant and realised that the situation is as serious as had been feared, with partial core exposure, problems with water levels and significant areas of damage.’

Meanwhile, there are reports a power cable has now been connected to the stricken plant.

Tokyo Electric Power Co has issued a statement confirming electricity can be supplied to the facility, which will help cool down nuclear reactors.

The radioactive plume from the plant has now reached the west coast of the US.

– NewstalkZB with CNN and WeatherWatch.co.nz

So if the radioactive plume from the plant has now reached the west coast of the US, are we being monitored too?

Thank goodness for that.. I think that was the answer many of us wanted to hear.. and news reporters steered away from it.. The Question? Would the nuclear radiation reach us here. in NZ well you answered – I think