Home > News > Now this high is getting better...

Now this high is getting better 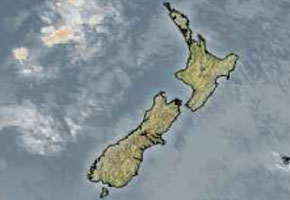 Our anticyclone is now beginning to take control today and the weather is becoming sunnier for many areas, the east coast of the North Island, Northland and South Westland still have a few issues however as those regions catch the airflow moving around the high. Winds are light in most places although from now on going into summer we’ll start to see sea breezes becoming a more regular feature in coastal areas, as the land warms up due to the heat of the sun drawing in the cooler air off the surrounding water around the country.

Interestingly places like Taupo and other areas inland near large lakes can sometimes still get a lake breeze develop in summer so not all areas are immune from these mesoscale developments, mesoscale meaning weather systems smaller than synoptic scale systems i.e. lows and highs.

A few showers are popping up on the West Coast just inland on the hills and there may be the odd afternoon shower in inland Southland and Otago due to some convective activity, thunderstorms are not likely though.

The warmest places today are in the upper North Island although not as far as Northland. Auckland is on 15 degrees and so is Hamilton. The windiest area is eastern parts of Northland, Kerikeri has easterlies at 30 km/h gusting to 44 km/h.

We sure are not having it very good here with a strong easterly as you say, also quite cool and quite a bit grey at times so not a pleasant day out.
Most folk are rugged up again in winter clothes.