Home > News > Nothing spicy in the weather for the sho...

Nothing spicy in the weather for the short term 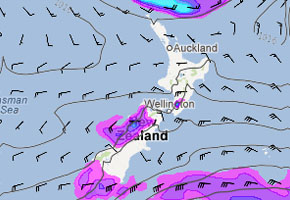 The weather coming up isn’t spicy enough for me to labour on about something exciting, there just isn’t much to talk about in regards to tomorrow’s weather. There is a low to the north of the North Island that does get a little close however mainly this will bring some cloud and southeasterly breezes to the far north.

For this evening though strong winds from the northwest are likely to develop particularly in inland areas of the South Island then easing tomorrow morning with the passage of a weakening front.

There will be some rain on the West Coast of the South Island which will ease to showers tomorrow morning, showers about the lower South Island also ease during the day and clear in the evening.

Still, there will be some pleasant weather tomorrow for the North Island again, westerlies may bring some cloud to the likes of Taranaki through to Kapiti.

So when is our next window of interesting weather going to come by? Interesting to me means thunderstorms. Well, this coming weekend. A chance of thunderstorms mainly in the west of the South Island on Saturday then in the west of the North Island later on Sunday. North Islanders are likely to have a reasonably pleasant Saturday though with warm temperatures so have no fear the weekend will not be a wash out, mainly this system starts to cause issues for the 2nd half of Sunday onwards.