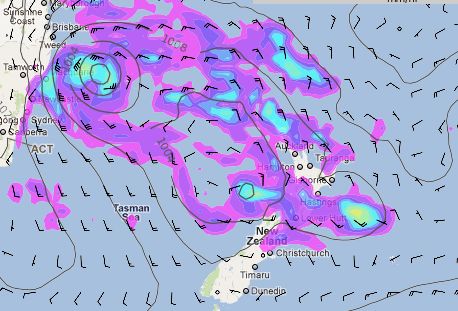 High air pressure will weaken over the country today allowing the slow rain bands and thick cloud to spread across the North Island.

Light rain and drizzle is expected first from Auckland northwards this afternoon with a period of heavier rain overnight or during Thursday.

The rain will head south during Thursday but rain warnings are not expected.

WeatherWatch.co.nz says the second front, moving in tonight and tomorrow, could trigger some heavy downpours as it taps into sub-tropical air.  Isolated thunderstorms are also possible in Northland later today.

Across eastern and southern parts of the North Island and for much of the South Island higher air pressure should mean mostly dry weather with light winds.  The sunny weather, however, is predicted to come to an end either during the day or overnight tonight as the clouds head south.

In saying that, the South Island (especially the lower two thirds) is predicted to be mostly dry or unaffected by heavy rain.

Showers, rain and drizzle patches are expected across many parts of the North Island from late today until Sunday as this system rolls by – but long dry spells will also be in the mix.