Home > News > Northern low with us until Thursday̷...

Northern low with us until Thursday…then another comes in 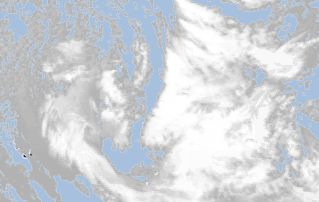 It’s been affecting the weather in the north since the weekend – and it’s not going anywhere fast.  A low with sub-tropical connections brought heavy showers and thunderstorms to parts of northern New Zealand yesterday, but two days since the low drifted just west of the Northland and Auckland coastline it’s showing no signs of going anywhere fast.

The low is predicted to remain circling just west of Auckland today and during Wednesday, with it finally drifting across northern New Zealand on Thursday.

Humid conditions with low cloud and drizzle or light showers have been affecting Auckland, Northland and other northern regions since Sunday and the long range forecast isn’t changing.

Despite a brief southerly change coming this Friday and Saturday the winds will again swing back to the north east this Sunday and into early next week according to some models as another low forms in the northern Tasman Sea.

This all less than a month since NOAA in America declared La Nina was back.

In New Zealand La Nina weather patterns produce more sub-tropical lows which help bring more nor’easters to the country.  This brings warm weather to northern and western parts of New Zealand but can bring cloudier and cooler weather to the east.

Hi team. at 00.30 am this morning the skies above Mamaku ( 680 Mtrs above sea level) woke up and gave the mightiest clap of thunder and lightning that shook the house and sent a surge of power down the phone lines that blew my modem and brief power cut. I have been fielding a few ph calls this morning from folk whose modems arnt working and in 1 case there computer fried as they had there landline sitting on the pc box. This damage only occured if the modems /computers were switched on and running, as was mine. It threw me off the computer after give a loud crack and the modem flashed sparks. amazing really. Carnt recommend enuf of the importance of surge protectors for your electronics. cheers