Northeasterly airflow this week – not good for snow 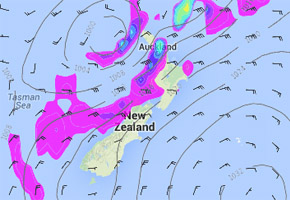 The first week of the school holidays is going to be dominated by a northeasterly airflow, squashed between an anticyclone east of New Zealand and a low pressure system to the west. Later on Friday the airflow tends more northwesterly.

On Tuesday expect strong east to northeasterly winds about the upper North Island, winds are likely to reach gale force at times from midday about Tauranga across to Raglan northwards. Skies will be cloudy with patchy showers, rain about Northland from midday possibly heavy evening onwards. Skies will be cloudy along
the east coast from Gisborne through to Wairarapa with drizzle overnight, high cloud increasing elsewhere with
freshening easterlies.

Plenty of high cloud about the South Island with northeasterly winds, the best weather will likely be about Southland and Otago.

Wednesday sees brisk east to northeast winds across all of the
North Island, a few patchy light showers about but many long dry spells too.
Expect areas of rain Auckland northwards during the day, the Waikato and western
Bay Of Plenty sees rain overnight. Mostly cloudy across all of the South Island
with easterly winds for all. Drizzle patches along the West Coast and about
Nelson from late afternoon.

Patchy rain or drizzle across much of the North Island on Thursday with brisk northeasterly winds, rain may be heavy about the Coromandel and Bay Of Plenty during the day. Breezy northeasterlies across
all of the South Island, areas of rain for the West Coast and Nelson. Rain about
Nelson may be heavy at times. Canterbury and Marlborough sees the odd brief
spell of rain during the day while Southland and Otago are mainly dry with high
cloud.

Expect similar conditions across the North Island on Friday then later in the evening the airflow changes to the northwest with rain easing for many regions. The east coast sees the odd spot of rain during the day, overnight
rain moves in. Rain for the West Coast of the South Island during the day, thick high cloud out east with the odd spot of rain and northeasterly winds continuing. Southland and Otago once again get the best weather although expect plenty of high cloud still.

This type of weather is not good news for ski fields as the freezing levels are quite high. But next week holds some hope as the airflows are looking more southwesterly bringing in colder temperatures.

How does the impending easterly weather event compare to the storm a few weeks back, particularly for the Coromandel?

Potentially it won’t be as bad but more widespread, check out the last few stories for information on the incomming winds!