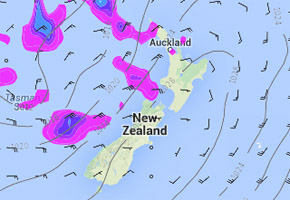 The first day of the school holidays has a northeasterly airflow building over the country, squashed between an anticyclone just east of New Zealand and a deepening low pressure system in the Tasman Sea. The upper North Island looks fairly cloudy with showers about in the morning Auckland northwards then easing and mostly clearing around midday, the odd shower may continue in eastern coastal areas. Northeasterly winds will be fairly breezy, strong at times later in the day.

Expect east to southeasterly winds about the lower North Island with mostly sunny weather, cloudy periods hanging about the east coast and the Wellington region however only about the Capital in the morning. Taranaki may see a few brief showers move
through in the afternoon.

The whole South Island sees east to northeasterly winds, cloudy areas along the West Coast. Showers north of
Hokitika in the evening then spreading south overnight, clearing in behind as a
warm front moves down. Other parts of the South Island can expect sunny spells
and periods of cloud, cloud thick for some areas in the morning especially
Canterbury.

Mostly sunny with some high cloud for Nelson, light winds.
Southland has a sunny day with light east to northeast
winds.