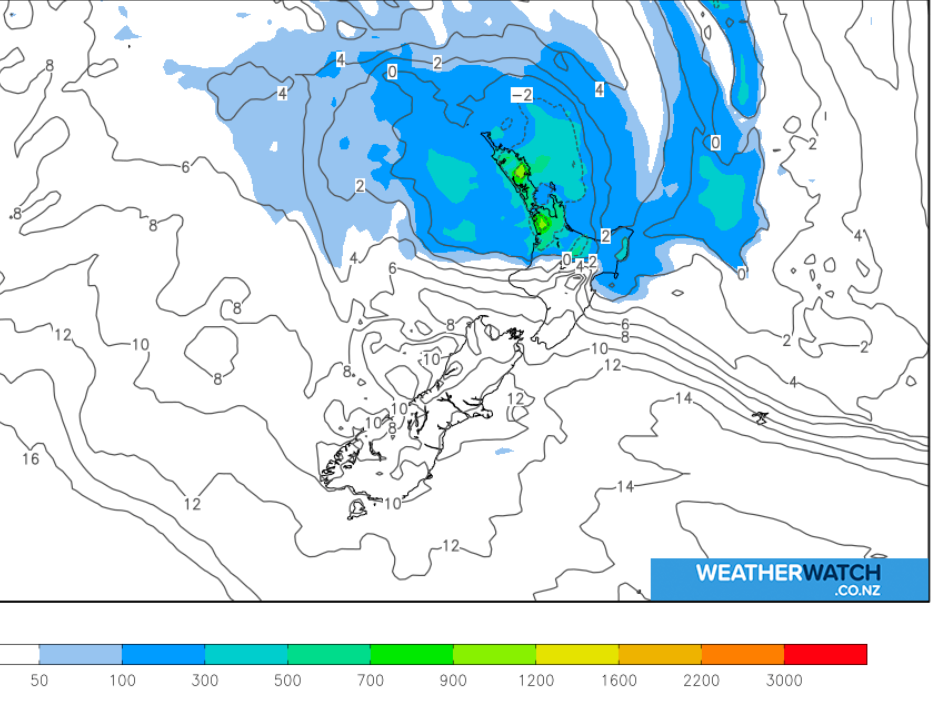 Updated 3:20pm — The North Island has the right weather conditions to create thunderstorms over the next couple of days due to a low pressure system stalled over the island essentially mixing warm and cool air with daytime heating.

While some large sunny and dry areas are about the atmosphere is more unstable. Light winds in northern areas today (and more central areas on Tuesday) will help make for some big cloud build ups.

Over the two hours Auckland has had a number of big thunderstorms with more large downpours developing. The N to ENE wind flow means the city centre isn’t quite so exposed, with West and South Auckland seeing the biggest convergence right now. However as we head into late afternoon downpours are likely to move into the CBD.

Since 3pm the downpours in the south have started to ease, also with fewer thunderstorms in the west.

These downpours and thunderstorms are being caught up in the big clockwise airflow around the low that is just a couple of hundred kilometres offshore to the west of Auckland City.

Here are earlier rain radar images so you can compare:

Inland areas are most exposed but coastal thunderstorms may easily form (or drift from inland into coastal zones).

There is some risk of isolated hail and even isolated tornados. The risk for hail or a small tornado would be underneath any of the biggest thunderstorm cells that form – most likely being categorised as a ‘severe’ thunderstorm by MetService.

Government owned and tax funded forecaster MetService is warning of a chance of hail, thunder, severe thunderstorms and a low risk for isolated small tornados also.

The risk maps at WeatherWatch.co.nz also paint a picture of areas most exposed today. You can see this map animated here: www.weatherwatch.co.nz/maps-radars/lightning/thunderstorm-risk

Keep up to date with thunderstorms on our Lightning Page: www.weatherwatch.co.nz/maps-radars/lightning/thunderstorm-risk