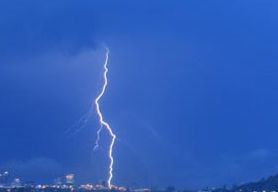 A few rumbles of thunder have already been heard across some parts of the North Island early this morning and this afternoon that risk increases a little further.

The risk for thunder is widespread, covering much of the North Island, but only a very slight risk remains for the upper South Island.

WeatherWatch.co.nz says while the risk is widespread the number of thunderstorms is not likely to be, with most thunder isolated within showers that either move in from the Tasman Sea this afternoon, or develop in afternoon showers that form overland.  These showers could be briefly intense and cause localised flash and surface flooding due to the nature of the showers and their expected slow movement says WeatherWatch.co.nz.

New Zealand’s only free and live Lightning Tracker, which can be viewed here, has been fairly quiet so far today detecting only a handful of lightning strikes around the North Island.

Fairly decent thunderstorm here in Hastings around 6ish, arrived with hail (some being about pea sized) some heavy rain bursts, and long, loud rumbles. Lasted around 30-40mins, though is still fairly black here now.