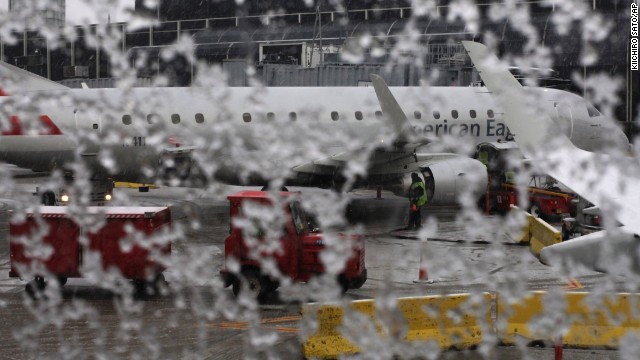 Thousands of Ontario, Canada, residents made do without power Monday in the aftermath of storms that toppled trees and brought down power lines. Meanwhile, residents in the upper Midwest prepared for bitter cold wind chills.

More than 300,000 customers remained without electricity Monday across Ontario, including 219,000 in Toronto, utility companies reported, in the wake of what Mayor Rob Ford called one of the worst ice storms to hit the city.

Still, the city was functioning and conditions were “not even close” to warranting an emergency declaration, he told reporters Monday.

Toronto Hydro CEO Anthony Haines said major power lines are being restored at a rate of one every few minutes, but street-to-street work remains, and he couldn’t offer a guarantee everyone will have power by Christmas.

“I know everybody wants an absolute time, but I just can’t give it to you,” Haines said.

In the United States, areas that had been as warm as the 70s on Sunday began a slide into frigid territory as Canada sent some of that cold air sliding across the eastern United States.

Dangerously cold wind chills were on tap in parts of Kansas, Nebraska, South Dakota, North Dakota, Minnesota, Iowa, Missouri and Illinois. Wind chill warnings were posted for parts of Minnesota, warning of of wind chills as low as 45 below zero.

Still, the picture was much calmer than over the weekend, when storms left at least 10 people dead.

But temperatures will fall each day until Wednesday, and by Christmas, New York might not even reach the freezing mark.

And in northern New England, another round of snow and ice is set for Monday, the National Weather Service said.

Southeast: When it rains, it pours

Rain was finally tapering off in Georgia, South Carolina and states in the Mid-Atlantic. A wave of cold temperatures will take its place Tuesday. Temperatures will likely be 10 to 15 degrees colder than normal on Christmas Eve and Christmas Day.

The storms left some Michigan residents dealing with no electricity. Sara Hadley’s family lost power after an ice storm struck her hometown of Lansing. She sent photos of some of the countless icicles in her neighborhood.

Coastal and valley rain as well as mountain snow is in the forecast through Tuesday, the service said.

Higher elevations could get dumped with 6 to 12 inches of snow.