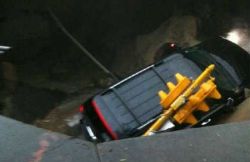 America and Canada have been hit by fierce thunderstorms this week causing all sorts of chaos.

In Iowa 250mm of rain fell in just half a day, causing a dam to catastrophically fail – flooding a number of homes.

Flood waters have caused problems all over the place.

Here are our top three picks from Weather.com.

An SUV and a traffic light were victims of a huge sinkhole that opened up at a Milwaukee intersection from the flash flooding on Thursday.

A towering thunderhead behind Toronto’s CN Tower on Sunday, July 18

A beautiful shelf cloud in Grand Haven, MI as a storm rolls in on Sunday, July 18.  Three EF0 tornadoes were confirmed in Michigan from Sunday’s storms.