Niwa publicly attacks credibility of MetService warnings – and nothing is said 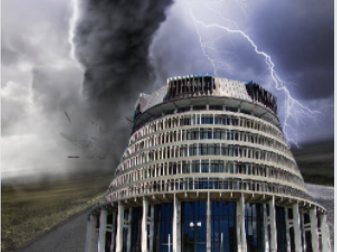 UPDATED 11:19am — A stunning thing happened yesterday for the first time in NZ. An official Government Agency attacked the credibilty of a Metservice warning before severe weather even arrived.

New Zealand now has a set up where the Government can put out two opposing official severe weather forecasts – perhaps to ensure one is always going to be right? More likely it’s about commercial greed with Minister Megan Woods telling us repeatedly she is powerless to step in – even as Minister overseeing Niwa. Ministers before her did step in.

This could also create a headache for Civil Defence (MCDEM) with Niwa dismissing MetService’s warnings.

Niwa’s tweet yesterday further erodes MetService’s mana – and for now MetService management is letting it happen with no public push back yet again and no throaty defense of why the public should even listen to their warnings or watches. MetService CEO Peter Lennox is doing his own forecast team a disservice by not staunchly standing up for them while dismissing Niwa’s public jabs at the quality of their warnings.

Judging by damage today – and from MetService’s own tweets – it’s very clear Niwa was wrong, and damaging winds over 100km/h and possibly over 120km/h uprooted trees and cut power.

Niwa also announced yesterday they are competing with MetService with daily weather videos, all because Niwa is aggressively commercially taking on MetService with weather – this is also crazy. The Government is attacking itself using your money for no gain to the public – as you can see this is a not a race to be more accurate, it’s a race to cover all bases which in the forecasting world is highly, highly, dangerous.

The Commerce Commission is now investigating anticompetitive behaviour and, perhaps more importantly, possible abuse of market power with Niwa now competing against MetService and both not playing nicely with the private sector that funds their entire existance.

We hope MetService defends their tax funded warning system today otherwise the public – and the news media – have every right to be confused next time a severe weather watch or warning is issued by MetService.

A couple coastal stations got over 120kmph gusts, a station in the southwest recorded a 107kmph gust and the Harbour Bridge reached 85kmph. There were a few power outages among other impacts. ^Lewis

@WeatherWatchNZ it got pretty damn windy in Whenuapai yesterday, ripping up and damaging our crops. The lack of warnings by the government agencies is bloody terrible. pic.twitter.com/lwNBJkIC0j

This is becoming outrageous – two government agencies attacking each other, on matters potentially affecting public safety. Instead of continuing to stand idly by, Ministers have to get this house in order https://t.co/V9GbvjOMvo

I’m happy to answer any questions you have about the Auckland forecast. We stand by our forecast – it was a windy and wet night for us. ^GG

Well, this metservice vs niwa drama just further cements my decision to always check weatherwatch first when I want an independent and as-accurate-as-possible view on the weather. Thanks Weatherwatch!

This is astonishing. Megan Woods needs to step up and sort this out. Powerless – yeah, right.