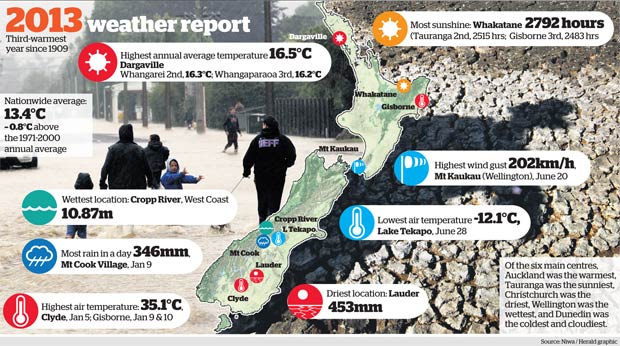 The country also suffered one of its worst droughts on record.

“I think it indicates that there’s been a significant upward trend in the temperatures.

“There’s no guarantee that next year will be warmer again, but we are expecting temperatures to continue to increase.

“The general drift of temperatures over the past 100 years…I think you could probably fairly safely associate that with global warming.”

The southerlies which hit Wellington in June were some of the worst on record, while the big drought which crippled farmers for the first three months of the year was alleviated in April by heavy rain, Dr Revell said.

“That was one of the worst droughts we’ve experienced for a long time.”

Of the six main centres, Auckland was the warmest last year, Tauranga was the sunniest, Christchurch was the driest, Wellington was the wettest, and Dunedin was the coldest and cloudiest.

Over 2013, eleven tornadoes and four waterspouts occurred, from as far south as mid-Canterbury to as far north as southern Northland.

While they didn’t cause any injuries or deaths, they were considerable damage caused to individual properties and vegetation.

2013 was the driest year on record for Dargaville, Toenepi (near Morrinsville), Taupo and Turangi, with these locations each recording between 67 per cent and 72 per cent of normal annual rainfall.

Above normal rainfall was recorded in parts of the eastern South Island including Marlborough, North Canterbury and North Otago. Ranfurly, Alexandra and Lumsden all had near-record high annual rainfall totals.

â€¢ The highest air temperature was 35.1C, recorded at Clyde on January 5, and at Gisborne on both January 9 and 10.

â€¢ The lowest air temperature was -12.1C recorded at Lake Tekapo on June 28.

â€¢ The driest location was Lauder, Central Otago, with a mere 453mm of rainfall recorded.

Phil, just to show you are not one of those raging global warmer scaremongering ecotheologians, how about an occasional article presenting the sceptics viewpoint? To date I have not seen one, but 4 pro-global warming stories in the past month. It makes me realise you must be an alarmist. The trouble is, an alarmist  can’t be a proper forecaster as well, because by their own admission forecasters can’t go beyond 10-day projections (although metservice only claims 5-days). That puts 10-years ahead, and a century ahead out of reach. And so when guesswork takes over it becomes 50/50 each way, which is a waste of everyone’s time and money.

Oh yes? – I’ve seen quite  a pile of anti-AGW claptrap in newspaper Letters to the Editor recently, and only one pro-AGW effort – completely one-sided. If I had a dollar for every time I’ve seen the “can’t go 10 days, so decades/century out of reach” fallacy trumpeted by denier ignoramuses, I’d be rich by now. I suggest your learn something about statistics and meteorology instead of laying bare your ignorance.

If you actually want to understand the differecne between weather and climate – bet you don’t – read this.

It does make me wonder what happened between 2000 & 2013? Is that not news? I guess not if it doesn’t fit your agenda

The 3 warmest years all occurred since 1997, and 2005 (amongst others) was also very warm. I suggest you do some research before rushing into “print”. You two are typical of the trolls that emerge when annual reports are published. Why don’t you look at the Australian one (easily the warmest year on record, with 25 times NZ’s land area…) – what’s your riposte to that?

That’s pathetic and fearmongering at its worse.

Great to see such a we rise in temps, I’m looking to grow crops I may not have been able to grow in the 0.8c cooler temps, just as the locals grew Grapes in Greenland when temps were warmer there. We can do so much more in self sustainability with a warmer climate, much more than we could with a -40c temp pattern that the US is experiencing recently.

This is fantastic news for us all and the plants and crops love it.

What I do fear is the coming ice age that is not too far away according to many a scholar and other wise souls.

Its only when organisations try to tell me that man has caused the average temp to rise by a “wopping” 0.8c – this is when they lose any credibility and should do.

Now, the sun is shining so off to grow some plants of a very tropical origin, a bit of variety to look forward to on the dinner table in the coming months.