Niwa and MetService give two official temperature records for Gisborne 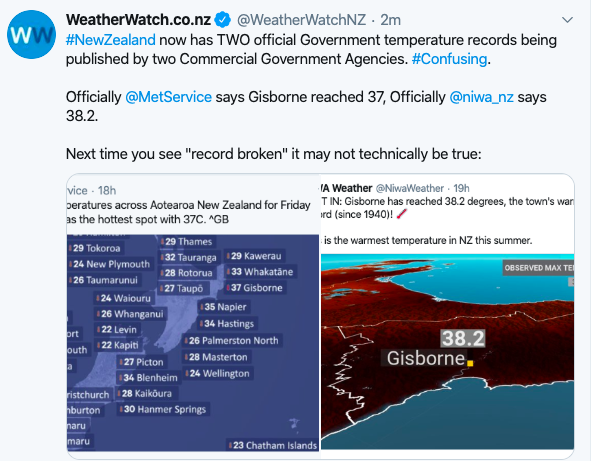 Niwa (once climate forecasters now weather forecasters) is in the news to beat MetService and MetService is quietly allowing it to happen – we are unsure why but for years there have been rumours of behind closed door deals which keep both Government forecasters ‘ok’ with this highly odd arrangement.

But the NZ public are the ones that miss out.

While Minister Megan Woods said in 2018 there was no problem with the double up – something the Commerce Commission is now investigating – she also said their profits for her to “spend” was her main goal as Minister. Not accuracy of data or record keeping or the bizarre commercial double up.

Data is highly important – especially if you’re seriously measuring the climate. To have two official numbers will not only cause confusion, it will allow people on both political sides to cherry pick certain numbers to make political arguments about Climate Change.

The commercial aggression between Government Agencies Niwa and MetService isn’t just about getting headlines – it’s also prompted the Commerce Commission to investigate them both for anti-competitive behaviour and abuse of market place power from these two tax funded agencies.

There should only be ONE official Government weather voice and only ONE official data set from the NZ Government. Having a double up – for commercial reasons only – goes against every other first world nation on earth.

Next time you see “record broken” it may not technically be true: pic.twitter.com/RjzsfKmIz9