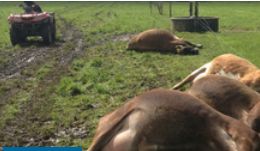 A Waikato farmer has been left counting the cost of Saturday night’s wild electrical storm after finding nine cows killed by lightning.

Russell Brown found the dead cattle beasts – which has cost him up to $18,000 – lying on their sides in two close groups beside an electric fence.

Lightning had smashed and splintered a fencepost, and Mr Brown thinks it either sent a fatal shock through the wires into the dairy cows huddling near the fence during the storm, or killed them outright.

But they bore no scorch marks, or any sign of being struck down, he said.

“It looked like their legs buckled from straight underneath them,” the 47-year-old told APNZ today.

Lightning strikes late on Saturday were so severe they shook his Te Awamutu farmhouse.

But he thought they had escaped the worst of it until he went to bring his herd of 135 cows in for milking early on Sunday morning.

“I opened the gate and saw one cow tipped over, and I thought it might have got a fright from the lightning or got jammed in the fence”‘ he said.

“But as I went further into the paddock I saw more and more and wondered where it was going to end to be honest.”

The storm tore through Wellington on Friday night – then again on Saturday night/Sunday morning for the upper North Island.  WeatherWatch.co.nz detected, at one stage, over 1000 strikes an hour.

Federated Farmers said while electrical storms occasionally kill stock, it is unusual that nine cows would perish at once.

“It happens from time to time. Anecdotally, my great-grandfather had a bunch of hereford cattle standing under a tree in south Westland years ago and lost quite a number.

“There can be big trees or powerpoles around, or other times, there can be no reason at all why it chose to earth where the animals are. It really is in the hands of the Gods.”

Mr Brown certainly hadn’t seen anything like it in 26 years of farming.

“You hear of these stories, and you know it happens – lightning has to come down somewhere – but you never expect it to happen to yourself,” the married father-of-three said.

The carcasses are “good for nothing”, he said, and have already been removed to be processed for blood and bone.

“I think there is a policy where you can insure your stock, but I imagine it’s pretty expensive,” Mr Brown said. “And you don’t expect things like this to happen.”

However, he’s been buoyed by support from local farmers.

One friend has already offered him three cows, while a stock agent called in this morning to say someone else wanted to donate a cow.

WeatherWatch.co.nz said on Saturday that lightning kills more people worldwide than any other type of severe weather.  “This is dangerous stuff” said head weather analyst Philip Duncan on Saturday night, shortly after advising anyone who hears thunder to remain indoors until the storm cells had passed.

– Image / Some of the nine cows killed by lightning / APNZ

Glad no people were hit, this event highlights the danger of lightning.