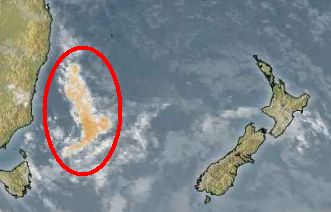 As the centre of a strong anticyclone inches closer to New Zealand a new frontal band is today quickly developing behind it, just off the New South Wales coastline.

The anticylone, which is predicted to cross the North Island on Monday and Tuesday, will quickly be replaced by an incoming rain band, which may produce rain heavy enough to prompt rain warnings next week predicts WeatherWatch.co.nz.

Rain warnings are most likely along the entire West Coast, the Nelson Ranges and possibly into Mt Taranaki.  It’s also possible heavy rain later on Wednesday or Thursday morning could prompt a rain warning in some northern regions, such as Bay of Plenty.

With such a strong high departing to our east mid next week the left hand side of the high (or western side) will pull down moist air from the sub-tropics – helping to ignite the front even more.

The warm wind direction will also help the chances of isolated thunderstorms as the front passes over next week.

And the northerly flow will mean overnight temperatures are going to bounce back up – with no frosts predicted anywhere for at least the first three days of next week if not the entire week says WeatherWatch.co.nz.

Meanwhile the forecast for Sunday looks even sunnier for most places across New Zealand with the last of the small showers that have peppered Auckland and other west coast regions recently finally drying up.