Next two weeks: More hot & dry but an increase in wet weather for some areas 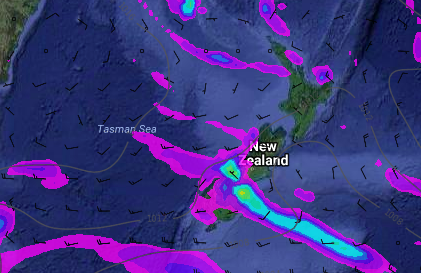 There’s no hiding from the fact it’s incredibly dry in parts of the country but over the second half of December there will be a bit more ‘life’ in the weather maps.

Since November high pressure has mainly dominated in the New Zealand area with little movement and little change in wind flows.

The second half of December shows these highs moving around much more – this allows wind directions to shift, air flows to come in from different oceans and between every high is an area of weaker, lower, air pressure which can see fronts moving through bringing wet weather.

Over the next couple of days we’re getting a demonstration of this with downpours and drizzle patches here and there, mainly in the south and east of the country.

But “here and there” is the theme. It’s scattered and hit and miss, meaning some will get relief while others will continue to be drier than average. Highest candidates for dry weather seem to be inland, north and west.

Due to the high pressure belts – which remain strong in the New Zealand area despite some recent weakening – WeatherWatch.co.nz still anticipates a drier than average pattern, generally speaking, up until Christmas and for the rest of December. But the hit and miss nature of these downpours – fueled by warmer than average waters around the country – could mean relief for some, perhaps most likely in the east of both islands this time.

WeatherWatch.co.nz said in September that summer was likely to kick off dry with big dry areas growing – but at the same time the warm air and warm oceans could lead to heavier downpours and a higher risk of localised floods (as we saw in Roxburgh, Otago a few weeks ago).

To drill down into your local area check the 10 day forecasts we have for your location. If the chance of rain is about 60% that’s a positive sign for a chance of soaking rains.  Also check out the 10 day rain maps – you will see how various fronts and bands of rain and showers appear from time to time – but also how high pressure then guides it away again and blocks it from reaching other regions.

It’s possible that over the next week or so eastern areas – some of the driest parts of the country – will get some relief.  This is due to high pressure no longer lingering east of New Zealand and instead mainly shifting back to the Tasman Sea area.

Oh and Christmas Day? At this stage we’re expecting mostly dry weather across New Zealand – but we’ll provide more details later this week – although our Weather Video from today does finally show the first potential weather map for December 25th!