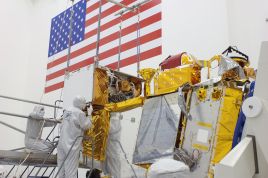 The development of a new series of weather and environmental monitoring satellites has marked a significant milestone with the delivery and the beginning of spacecraft integration efforts for a key science instrument.

The Visible Infrared Imaging Radiometer Suite (VIIRS) will be one of five instruments to fly on the National Polar-orbiting Operational Environmental Satellite System (NPOESS) Preparatory Project (NPP) spacecraft. VIIRS is regarded as a key component in NPP’s suite of instruments because it will provide highly detailed imagery of clouds, vegetation, snow cover, dust storms, sea surface temperature and other environmental phenomena. 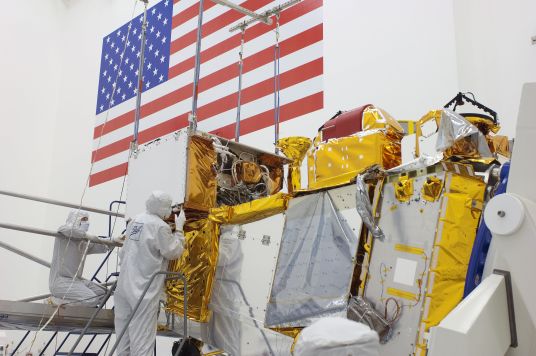 NPP is a joint mission to extend the time series environmental data records initiated with NASA’s Earth Observing System, including measurements made by the Terra, Aqua, and Aura satellites, and to provide risk reduction for NPOESS instruments, algorithms, ground data processing, archive, and distribution prior to the launch of the first NPOESS spacecraft.

“The delivery of the VIIRS instrument marks a long awaited and huge step towards completing the integration of the NPP mission. VIIRS will be the fourth flight instrument integrated onto the NPP spacecraft, only the CrIS instrument remains,” said Ken Schwer, NPP Project Manager at NASA’s Goddard Space Flight Center in Greenbelt, Md.

NPP is scheduled for launch in Fall 2011 aboard a Delta rocket from Vandenberg Air Force Base, Calif.

The NPP Project is a joint effort of the NPOESS Integrated Program Office (IPO), the National Oceanic and Atmospheric Administration (NOAA) and NASA. NASA’s Goddard Space Flight Center manages the NPP mission on behalf of the Earth Science Division of the Science Mission Directorate at NASA Headquarters.

The NPOESS will collect a massive amount of very precise earth surface, atmospheric and space environmental measurements from a variety of on-board sensors. This volume of data will allow scientists and forecasters to monitor and predict weather patterns with greater speed and accuracy.