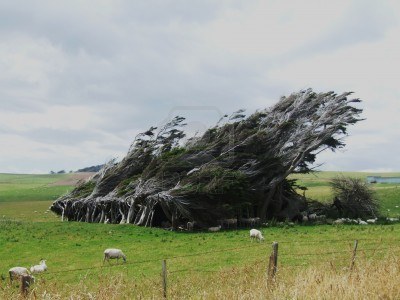 WeatherWatch.co.nz is keeping an eye on a depression that is starting to intensify quite quickly and could deliver decent gales overnight tonight across western and southern areas of the Mainland along with a few inland areas as well.

“This low seems to be deepening fairly smartly and the wind seems to be the biggest factor associated with it at this stage” says weather analyst Richard Green.”Air pressures are dropping quickly and it’s certainly one we’re watching” he says.

We’re picking the gales to take place mostly overnight and tomorrow morning and also the winds starting to punch above their weight  across some western and northern parts of the North Island.
Once this frontal system passes by chilly air is likely to strike the far south with wintry showers and snow levels falling qute quickly but this time Cantabrians shouldn’t see much of the white stuff as the wind direction looks more sou’ west than southerly.

With a week to go June seems to be finishing off fairly lively although some eastern areas are likely to miss much of the showery conditions however temperatures aren’t expected to be overly warm anywhere after today.

Frosts aren’t set to feature in many areas early in the week as the winds are expected to keep them at bay but there is more of a chance of Jack Frost forming later in the week as conditions ease.

Thunderstorms and squally conditions could hit the country from the west also overnight and tomorrow morning in regions that often susceptible as these fast moving systems pass through but there’s always an outside chance that very high speeds can be notched up in remote and isolated areas with aggressive bouts of thunder with torrential downpours.

Today isn’t expected to be all sunshine and lollipops either as showers or bands of rain are likely to spread to more than three quarters of the nation with drier conditions likely in the east but this appears to be the entree before the main event getting into gear withing the next 24 hours.

Just cant wait for the next SW squall covering all with pine needles,and the greyness and rain.Its seems as this winter is shaping into like reminiscent of the ones prior to 2007 that seem to last forever.

Auckland’s rain MTD is below average in the NE and barely average in the SW. Your sunshine MTD is a little above average. You also have a relatively small temperature anomaly (less than 0.5C below normal), unlike a large portion of the country. Down here rainfall is above average, and sunshine a bit below, though a brighter spell starting yesterday may save us. Unless this week really wrecks your numbers, you have not earned any sympathy as yet at all, especially in light of your quite sunny May.