Next decent rainfall, is any on the way? 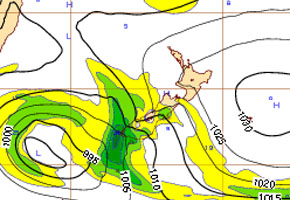 Apart from isolated afternoon heat showers today and tomorrow there isn’t a lot on the radar so to speak in terms of a decent period of rain, mainly in consideration to the North Island.

In the South Island a front should deliver some reasonable rain in the first half of next week on the West Coast, a few areas of rain will make it onto the east coast however at this stage it isn’t looking like anything substantial.

There is a chance the lower North Island may get a touch of rain mid next week due to the front mentioned however the upper North Island will remain dry.

On the Friday before Christmas (21st December) there are hints in some long range models of a low brewing in the south Tasman Sea so hopefully this will work it’s way north and get some needed rainfall to dry areas of the North Island. But fingers crossed it clears in time for a sunny Christmas Day.

Well, it is all a matter of timing. A long shot would have TC EVE curving down SW and joining up with the front and low pressure system in the Tasman behind our present high pressure to give us all a little too much rain in time for a Christmas clean up. Lets see! Odds,Personaly 60%.

I think your odds might be increasing looking at the gfs and ecmwf models this morning. Rain water tank is low and needs a fill 🙂