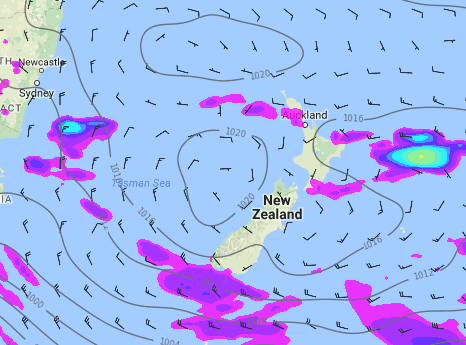 January has been an unsettled month due to a strong mix of low and high pressure creating windy days and big changes in temperatures. As we head into the final days of the month and the beginning of February it’s becoming clear that high pressure will be dominating the North Island – and off and on for the South Island.

In fact it’s a bit of a ‘wax on, wax off’ set up for the South Island with high pressure dominating one day, then backing off a bit the next as a cold front tries to head north. However it appears in February the highs will be stronger for both islands than they were in January, this will push more of the rough weather south of New Zealand over the Southern Ocean.

The further north you live, the more high pressure you’re likely to get – and highs bring in calmer, drier weather for the most part in summer. Those in Southland and the West Coast are most exposed to the changeable weather pattern – but even in these regions more sun and warmth is expected in the mix than there has been recently.

WINDY
Wellington still has windy days off and on – each time high pressure is challenged in the South Island by a Southern Ocean low or cold front it will squeeze up the isobars and make for a windy day around Wellington, Cook Strait and parts of the Southern Alps – but with a lack of oomph don’t expect much in the way of severe weather. Generally speaking the winds will be lighter over the next days than the past 10 days have been nationwide.

DRY
WeatherWatch.co.nz says regions that are already drier than average – like Northland, Gisborne and Hawke’s Bay – will unlikely receive much, if any, rain over the coming 10 days. There’s a fairly high chance of less of 1mm of rain falling in some areas over the next 14 days.

HEAT
This coming Sunday WeatherWatch.co.nz is forecasting Gisborne to reach 35 degrees in the shade while Queenstown has 19 degrees.