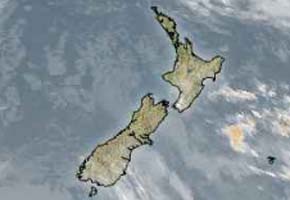 Conditions around New Zealand are basically areas of cloud, showers here and there with long dry spells too. Patches of drizzle are making there way slowly up the east coast of the South Island. The spots with the mostly sunny weather are on the West Coast of the South Island, about Nelson, Marlborough, parts of North Canterbury for now and the Bay of Plenty in the North Island.

The warmest temperatures not surprisingly are being felt in the Bay of Plenty on 16 to 17 degrees in the North Island. In the south, Hokitika up through to Nelson and parts of Marlborough are sitting on an average of 14.5 degrees.

There is relatively speaking some cold air coming up behind a drizzly front moving up the east coast of the South Island, so a little snow could be expected but accumulations won’t be large. Down to 600m in Southland and Otago a centimetre or two is possible, similar amounts in Canterbury later tonight however only down to 800m.

The wet weather isn’t over for the east coast of the North Island just yet, an invigorated period of rain or showers is likely to develop overnight continuing through tomorrow.

Do you see any improvement for central hawkes bay? Are we ever going to get our “another sunny day in paradise” weather back? For 12 months now its been colder, cloudier…not lets just say cloudy, and rain then rain and then more rain. Will there be a summer or is it ozzie (shudders) here we come.