New York: Snow on highway traps motorists for over 20 hours 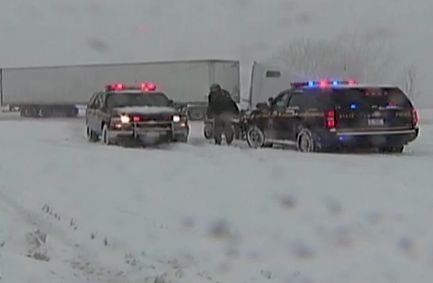 CNN — Heavy snow has stranded motorists for nearly 20 hours on a major thoroughfare near Buffalo, New York, with emergency personnel working to get them out despite continued and concentrated precipitation and up to two metre high drifts.

Tractor-trailers and passenger cars are marooned on two nearby six kilometre stretches of Interstate 90 — one eastbound and the other westbound. While there was some movement by early Thursday evening, large portions of the road remain closed to new traffic and the highway authority said it had no estimate when the interstate would reopen.

Authorities have plows and all-terrain vehicles to clear the road and provide food, water and gas to those stuck on the road, even busing stranded motorists to a senior center-turned-shelter in suburban Cheektowaga.

“We’re still using ATVs that have police officers or [firefighters] operating them, inspecting to see if anyone needs any services,” said New York State Police Capt. Michael Nigrelli. “We are seeing progress now, [and we’re] hoping in the next few hours to see some breakthroughs.”

The snow fell as fast as 8cms per hour Wednesday afternoon local time, and by Thursday morning many area residents woke up to drifts as high as 2 metres that, in some cases, blocked doors and driveways. Shifting winds from an east-moving front combined with record-breaking warm water temperatures in Lake Erie to create the intense early December storm.

D’Youville College’s men’s and women’s basketball teams spent at least 24 hours on the road — most all of it in a standstill on Interstate 90 — on their trip back to Buffalo from games in Pennsylvania, reported CNN affiliate WVIB.

Sam McMahon, who had been trapped on the interstate since 8:30 p.m. Wednesday, told CNN meteorologist Reynolds Wolf that while he has seen snow comparable to this, there is something unique about this storm.

“In terms of snowfall, I have seen snowfall like this before but I have never been stuck in a situation like this on the thruway this extreme,” he said.

The University of Buffalo student was heading home Wednesday evening and when he hit slow traffic. “By 9 o’clock, we were stopped,” he said. “Since 9:30 last night, I haven’t moved an inch.”

Frank Rodriguez, 22, whose office backs to the clogged highway, said people — including a few truck drivers, wearing only T-shirts as they waded through 75cms of snow — tried to scale fences all day to get food and warmth. Network Task Group, his telecommunications company, even brought out two ladders to help, he said, noting some motorists said by late afternoon that they’d been stuck for over 16 hours.

He said the interstate, which he can see from his workplace, was “completely dead” most of Thursday until small movement by late afternoon. Ironically, Rodriguez said his hometown of Grand Island, 11 miles north of Buffalo, had minimal snow.

“It was kind of weird — it was almost like a blanket” covering some spots and not others several kilometres away, Rodriguez said.

Read the rest of this article here