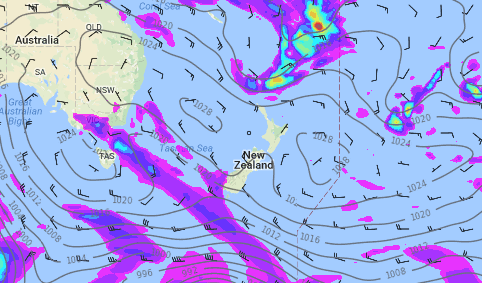 Updated Sunday PM — This week is August’s third week and it will be significantly more settled than the first half of August, says WeatherWatch.co.nz, as a solid belt of high pressure centres over New Zealand.

“People are asking us if the 10-day forecasts we have are correct with several days of dry weather, or even sunshine, in the forecast and we’re saying ‘yes, it’s looking likely!'” says head weather analyst Philip Duncan.

Why the big change this week? High air pressure and a lack of polar air. “To give you idea of how much warmer the nation is, places like Dunedin, which had low-level snow within the past week, will head for highs of 14 for a time this week,” says Mr Duncan. “Places inland, like Queenstown, which dropped to double negatives last week, will this week drop to around -2 to +1.”

“We will still see frosts – but they won’t be severe and they won’t be in places we don’t expect for mid-August,” says Mr Duncan.

High pressure doesn’t always equal sun – with gloomy weather at times for some coastal areas and the sunniest weather inland and at higher elevations. Even with the coastal cloud at times, the nation looks much sunnier this week overall.

The week ahead will be a great week for skiers and snowboarders too – and for farmers in the north and west looking for a break in the rain.  Some places have only had a couple of days without rain in the past 30 days.

THE RAINMAKERS THIS WEEK:

Monday – Downpours for the West Coast and around Nelson later in the day. The Far North and upper Northland have the risk of late showers too. A few showers/downpours are expected to spill over into some eastern parts of the South Island too, but most eastern areas will be dry. Plenty of cloudy areas around NZ on Monday.

Tuesday – High pressure grows further over the nation. There will be cloudy areas, especially in the north, and we can’t rule out a few showers here and there, especially in the east of the North Island, like Hawke’s Bay and Gisborne – and perhaps Northland – otherwise most places are dry on Tuesday.

Wednesday – High pressure properly takes control of New Zealand. A big high stretches from central New Zealand to inland Australia across the Tasman Sea. NZ is calm and settled and over 95% dry. The highest shower risk is in the north east corner (East Cape to northern Hawke’s Bay) and the south west corner (Fiordland) but the day is mainly dry even in those regions.

Friday – Showers on the lower West Coast as a front approaches, and perhaps around East Cape/Northern Hawke’s Bay as easterlies continue.

Remember WeatherWatch.co.nz now has 1500 forecasts covering every Kiwi Community, suburb and town in New Zealand – see how dry the 10 day forecast is for your place (By the way, when the % of rain is below 30% it usually indicates mainly dry weather)

Noon this Wednesday shows the massive area of high pressure stretching from central Australia, across the Tasman Sea and across central New Zealand and out east to the Chatham Islands / Weathermap

So much difference between NZ weather forecasters! You guys must use all different models?

Unsure about the third one and who they are, but MetService and WeatherWatch are pretty much saying similar things – there’s a big high in charge, cloudy areas and mainly dry – perhaps a few showers very top and very bottom but mostly out at sea. All reliable Forecasters tend to use the same models – it’s how they all interpret that data that makes them all different. Just like restaurants buying the same ingredients but making different meals.  One off national forecasts (above) are not the best way to track/compare accuracy as it’s very generic but you’ll find, over time, we all have different ways of interpreteing the weather – it’s then up to you to choose which one(s) are most accurate for where you are (because if you ask the forecasters they tend to all think they are the best!)