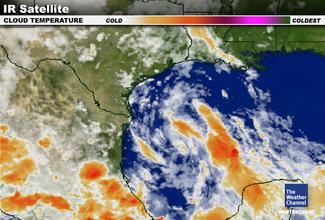 Weather.com:
The low pressure system in the southwestern Gulf of Mexico has been classified as Tropical Depression #2. As of 3pm NZT it was located about 425 kms to the southeast of Brownsville, Texas and moving toward the northwest. Top winds are 56km/h. At 62km/h it will become a tropical “storm”.

Atmospheric conditions are favorable for continued strengthening through landfall late Thursday afternoon or early evening. The forecast calls for the system to become Tropical Storm Bonnie Thursday morning. Tropical storm warnings are posted along the Texas coast from Baffin Bay south to the mouth of the Rio Grande River and along the Mexican coast from the Rio Grande River south to San Fernando.

The biggest threat from the system will be heavy rain. The system should take a path just to the north of Hurricane Alex from last week. The ground already saturated will lead to an increased flooding threat throughout northern Mexico and southern Texas.

The Rio Grande River is already in major flood stage between Del Rio and Laredo, Texas. The additional rainfall from the depression should exacerbate the flooding.

Elsewhere, low pressure east of the Carolinas is non-tropical and is expected to remain that way. Rain and thunderstorms will move into parts of the Middle Atlantic and Carolina coastal areas on Thursday.