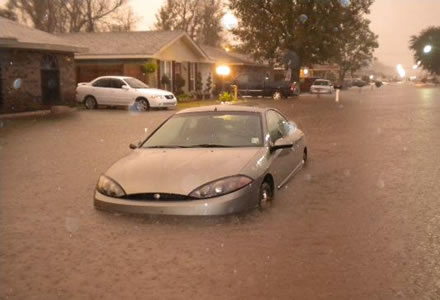 Severe rainfalls Monday night and Tuesday morning helped make this December the wettest calendar month on record in metro New Orleans, according to the National Weather Service – and that means flooding.

35 homes are reported to flooded with flood waters overwhelming a levee in three places.

Precisely 538mm of rain had fallen less than halfway into the month at Louis Armstrong International Airport, said Robert Ricks, the service’s lead forecaster. That total is the most to ever fall in a single month in the New Orleans area since 1947, when the service started keeping records at the airport.

However, for the ENTIRE New Orleans area, this rain total stands at number 3 on the all-time wettest month list.

“It’s pretty remarkable, since we accomplished it in just 14 days,” Ricks said. “We have a lot more room for wetness to go before this month is over, too.”

Meteorologists expect even more rain Tuesday, and a flash flood watch remains in effect for all of southeastern Louisiana until the afternoon.

Six homes flooded in the St. Charles communities of Boutte, Paradis and Luling by 8 a.m., government spokeswoman Renee Allemand Simpson said. Numerous streets were flooded and closed. Officials shut down all Catholic and public schools. They distributed sandbags to those needing some.

Meanwhile, water poured down on Kenner between 5 a.m. and 7 a.m. Tuesday, flooding some streets, public works supervisor Kenny Melvin reported. Melvin said he had no reports of flooding in buildings or homes, though some Kenner residents reported to authorities that water seeped into their homes.

Some 5,000 homes and businesses scattered throughout metro New Orleans lost electricity from about 5 a.m. to 6:30 a.m. because of the downpour, said Morgan Stewart, a spokesman for Entergy. Crews re-energized 3,500 of those customers by 9 a.m. and would work to restore the 1,500 remaining customers as long as the weather allowed them to.

All rivers in southeastern Louisiana swelled to high levels, most notably the Pearl River. Its waters at Bogalusa stood at 20.6 feet about 8 a.m. Tuesday, well above its flood stage of 18 feet.

The Pearl River’s waters at the town of Pearl River, where flood stage is at 14 feet, rose to 15.1 feet, Ricks said.