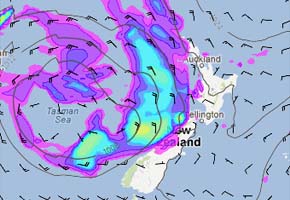 The low currently about to move into the Tasman Sea is on track and the weather associated with it is still looking like unfolding as predicted by WeatherWatch.co.nz forecasters yesterday. The main difference with this low as opposed to the last few systems is that it will be quicker moving.

Weather analyst Aaron Wilkinson from WeatherWatch.co.nz says, “We are still expecting this new low to deepen a little west of New Zealand over the weekend then move over Monday before pushing out to the northeast on Tuesday as an anticyclone nudges in behind it. Expect rain in the west of both Islands on Sunday, rain will be heaviest about the northwest of the South Island and Taranaki. Then showery conditions on Monday and Tuesday for the east of both islands and the North Island’s west coast as the flow changes to the southwest.”

The anticyclone at this stage looks to finally give a longer spell of settled weather to the country from mid next week possibly through to the following weekend which will be good news to many. A northwesterly airflow is looking to build over the South Island next weekend which may bring milder spring like conditions to the east.

As for snow Mr Wilkinson says “Snow levels are looking to be above 900m in the South Island on Monday and Tuesday and 1000m in the North Island for Tuesday and Wednesday, so the ski fields should get a top up with around 10cm possible in both areas.”

Looks pretty nasty on the rain radar. Is Taranaki going to get hit?