New insight on why frost-free seasons are getting longer 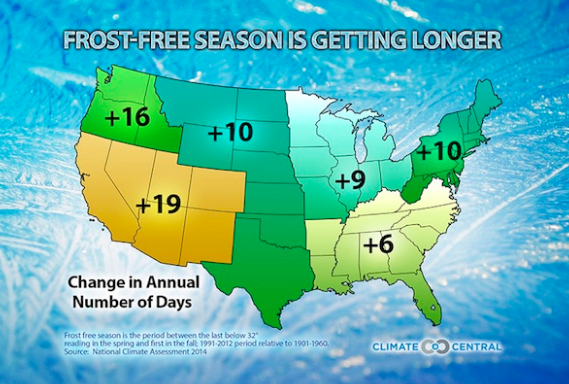 Across the United States, Jack Frost is taking longer summer vacations, and researchers are trying to get a better handle on how and why heâ€™s being pulled away. A paper published Tuesday in the open-access journal Nature Communications identifies a set of large-scale atmospheric circulation shifts that have helped keep frosts at bay during spring and autumn. These circulation shifts go beyond global- and hemispheric-scale warming in helping to explain our ever-lengthening frost-free season.

The circulations that drive day-to-day weather dictate when a given spot will experience the clear skies and calm winds that favor frost. According to the authors of the new paper, Courtenay Strong (University of Utah) and Gregory McCabe (U.S. Geological Survey), â€œrecent efforts to relate a century of observed changes in U.S. frost timing to various atmospheric circulations yielded only modest correlations, leaving the relative importance of circulation and warming unclear.â€

The new study uses a â€œclusteringâ€ algorithm to divide the contiguous U.S. into four regionsâ€”three latitudinal belts east of the Rockies (north, central, and south), plus a western region. It identified circulation features that account for one-quarter to one-half of frost timing during spring and autumn. â€œThese circulations appear responsive to historical warming, and they consistently account for more frost timing variability than hemispheric or regional temperature indices,â€ the authors wrote.

Itâ€™s no secret that frost-free periods are lengthening nationwide. The trend in recent decades has varied from about a week longer in the Southeast to nearly three weeks longer in the Southwest (Figure 1). The current study found a quite similar geographic pattern when looking across a longer time period (1920-2012). The 2014 U.S. National Assessment noted that the frost-free season could grow by another month or more over the 21st century: â€œThese increases are projected to be much greater than the normal year-to-year variability experienced today.â€

Thus far, most of the lengthening in the frost-free season is because of the last frost of spring arriving earlier, rather than the first frost of autumn showing up later. Autumn frost timing saw a significant change in just two of the four study regions (north and west). But all four regions now see their last spring frost occurring about 5 to 10 days sooner than it did a century ago. This lines up well with the observed trends in Northern Hemisphere snowfall. Snow cover during spring is declining markedly (e.g., in May), whereas thatâ€™s not the case in autumn (e.g., in November, when hemispheric snow cover has actually increased since the 1980s).

Circulation trends in a warming world

One would expect that a planet being warmed by human-produced greenhouse gases would tend to see longer frost-free seasons. That part isnâ€™t complicated, and the new paper doesn’t dispute it, but this research (and other recent work) is also trying to pry apart the role of circulation in determining where and when the planet warms up the most. Previous studies on frost timing have found some correlation in the western US to the Pacific-North American (PNA) pattern, whose positive mode (which has been prevalent in several recent winters) favors warmth in the West and cold in the East. Other work has found links to the Atlantic Multidecadal Oscillation.

The new research identified eight mid-level (500-millibar) patternsâ€”one each for spring and fall in each of the four study regionsâ€”that were most strongly associated with frost trends. If thereâ€™s a common thread among these, itâ€™s the PNA. â€œThe frost-driving circulation patterns were broadly PNA-like, meaning that most featured at least three centers of action organized as a wavetrain emanating from the Pacific Ocean,â€ said the authors.

So how much could global warming be stimulating these circulation changes? Rising global temperatures aren’t distributed uniformly, and it appears that the circulation trends identified by Strong and McCabe are giving the contiguous U.S. more than its “share” of frost reduction, with a good bit of regional interaction between temperature and circulation. â€œIt is fair to conclude that the circulation changes are an amplifier of temperature changes on a regional basis, especially during spring,â€ lead author Strong told me in an email. However, â€œon a global or hemispheric scale, there is [only] a certain amount of energy to distribute around the planet as temperature. Circulation-driven high temperatures in one place are usually accompanied by circulation-driven low temperatures in another.

â€œIn terms of what drives these circulation patterns other than large-scale warming, these are relatively understudied transition-season (fall and spring) patterns, so we know relatively little about their origins,â€ Strong added. The PNAâ€™s behavior is linked in part to El NiÃ±o and La NiÃ±a, but the atmospheric impact of those two phenomena tends to be biggest during the Northern Hemisphere winter rather than during fall and spring.

Research is increasingly turning toward the Madden-Julian Oscillation, which is best known for its organized areas of showers and thunderstorms that drift east through the global tropics every few weeks. An active MJO phase in the Indian Ocean may help stimulate a negative phase of the PNA, according to a study by South Korean scientists Kyong-Hwan Seo and Hyun-Ju Lee published this spring in the Journal of the Atmospheric Sciences.

Strong and McCabe point out that there are other key ways to measure the impact of spring and fall temperature trends on agriculture. Even in the midst of an overall warmer climate, as measured by heating degree days, circulation changes could still produce frosts or freezes late enough to damage crops.

â€œFalse springsâ€ are a particular concern. Any increase in warm spells toward late winter or early spring could prime trees and crops for major frost or freeze damage later in the spring, as was the case in the Midwest during 2012. A 2015 study led by Andrew Allstadt (University of Wisconsin-Madison) used temperature projections to estimate future change in U.S. leaf-out and first bloom, two important measures of springâ€™s arrival. They found that both markers could occur more than three weeks earlier by the end of this century, assuming that greenhouse gas emissions are unchecked.

Over large parts of the U.S., especially near coastlines, overall warming should help cut the risk of false springs, according to Allstadt and colleagues. In the nationâ€™s midsection, though, itâ€™s a different story. False springs could become more likely from the central High Plains to the Ohio Valley: here, the oceansâ€™ moderating influence is more distant, and cold intrusions could still arrive well after the increasingly earlier leaf-out and first bloom.

Story by WU Meteorologist Bob Henson, co-editor of Category 6 and is the author of “Meteorology Today” and “The Thinking Person’s Guide to Climate Change.” Before joining WU, he was a longtime writer and editor at the University Corporation for Atmospheric Research in Boulder, CO. Twitter: @bhensonweather.