New estimate: Up to twice as much oil coming from BP well 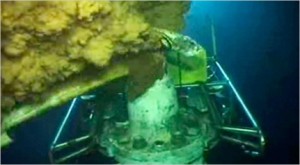 Scientists now estimate the leaking BP oil well in the Gulf of Mexico was releasing 20,000 to 40,000 barrels — or 840,000 to 1.7 million gallons — per day through last week, the head of the U.S. Geological Survey said Thursday.

The new estimate is of the well’s flow rate prior to BP’s cutting of the damaged riser pipe extending from the well’s blowout preventer last week, U.S. Geological Survey Director Marcia McNutt said. After BP cut the riser on June 3, it placed a containment cap over the preventer’s lower marine riser package to capture some of the leaking oil.

Scientists estimate that the spill’s flow rate increased by 4 to 5 percent after the well’s riser pipe was cut last week in order to place the cap atop the well.

BP says that with the cap, it is capturing about 16,000 barrels daily and funneling it to a ship on the surface. Before that, BP was capturing some oil through a siphon inserted into the well riser.

The latest figure was calculated in part by using high-definition video of the spill that BP released this week after demands from members of Congress.

Scientists from the Geological Survey, the Department of Energy and the National Oceanic and Atmospheric Administration and experts from universities and other research institutions worked on the latest estimates, McNutt said. The information is expected to help guide efforts to stop the spill and deal with its impact on coastal areas, fish and wildlife.

In a statement Thursday, BP said the company “fully supported this effort, providing the scientific team with data, including a considerable amount of high-resolution video.”

Still, Rep. Edward Markey, D-Massachusetts, said there will be an opportunity in a few weeks for the scientists to get a better estimate of the size of the flow. The group has told BP that they could get a more accurate estimate if they can send down equipment to measure the flow as the company attempts to swap out the containment cap on the well.

BP has yet to agree to the request, Markey noted in a letter to the company Thursday. “There are concerns that, without the best information on the size and force of this gusher, that the effectiveness of the new containment cap and relief wells could be compromised,” the letter says.