Nepal still rebuilding from earthquake – one year on 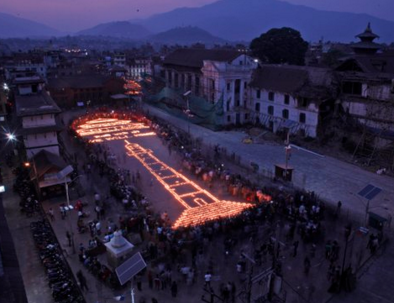 A year from the first of the two deadly Nepalese quakes, many people are still afraid to live in their homes.

The dual quakes claimed 8,856 lives, destroyed or damaged 800,000 homes and left up to four million people without a safe place to live.

It caused avalanches on Mount Everest which killed 21 people – making it the mountain’s deadliest day.

World Vision chief Chris Clarke said the charity was already on the ground in Nepal, and launched into response-mode backed by New Zealanders.

“New Zealand has donated over $1.9 million which is a huge response.”

The charity is still working in Nepal, and expects to be there for years to come.

Mr Clarke said initially it was about getting people food, water and shelter.

He said the focus now is on children, their education, and helping them to deal with post-traumatic stress.

“We’ve set up a number of, what we call, child-friendly spaces throughout Nepal which are designed to help children actually process something of the experience. Otherwise they carry very severe post-traumatic stress syndrome through the rest of their lives.”

Guy Cotter was with his company Adventure Consultants on Mt Everest’s Camp one when it struck.

He said the group knew straight away that it was a major event and made their way to base camp, where an avalanche had killed 19 people.

“We got down there the next day helping deal with the carnage. It was certainly a major event and of course over 9000 died throughout Nepal from the effects of that earthquake.”

New Zealand Red Cross worker Rosemarie North is usually based in Delhi, but has frequently visited Nepal since last July.

Catbells last night, lit up by hundreds of people with torches raising funds for the Nepal earthquake @NotJustLakes pic.twitter.com/pDTLb3oZAP

“Any disaster leave a long emotional tail for people, and the Nepal earthquakes are no different. There were dramatic earthquakes and then a series of aftershocks that left people very nervous indeed,” she told Newstalk ZB from Nepal.

“The main thing you notice here is that people do not want to live in their houses, even if they are seemingly safe.

“So they’re living next to them, or a few metres away, often in terrible little shelters made of tarpaulin which is now shredding, bamboo or corrugated iron, or salvaged material. So for a year they have been living pretty much exposed to the cold the heat and the rain. And now they’re looking at a second year in these conditions.”

Ms North said the Red Cross is quite worried about people living in the temporary shelters which pose significant risk to their health.

The emergency response effort over the past year has been quick and successful at delivering lifesaving help like tarpaulins, water and medical equipment, she said, something the $3 million in donations from New Zealanders has helped with.

“One year on, it’s a slightly difficult stage in the operation in a way. We want to move into longer term recovery. And we know from disasters like the Canterbury earthquakes that that’s the time when heaps has to be sorted out. Lots of administrative stuff, lots of systems – you want fairness, you want consistency.

“So there are a lot of things that the Nepal government still has to nail down, guidelines for rebuilding houses for example.”

The Red Cross has plans in place to rebuild homes in 11 of the worst-affected rural districts. It has been training stonemasons, carpenters and builders to create safer homes and structures, helping communities prepare for future disasters.

“The aim is to leave people in a safer and more resilient position – because this earthquake won’t be the last one,” North said.

It’s also been able to help with things like rebuilding health clinics in the mountains, essential for things the likes of childbirth and medical emergencies, along with rebuilding schools, reconnecting water and helping families restore their livelihoods through cash grants, which enable farmers to buy crop seeds.

Time to remember how long rebuild takes, Christchurch is a very good rememinder!