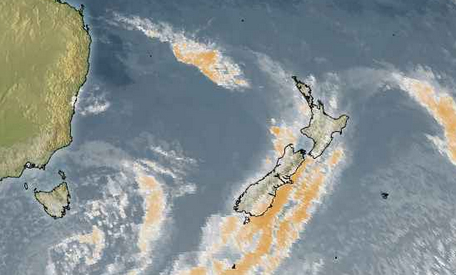 Today will see the northwesterly airflow which has dominated much of yesterday’s weather stick around, though some parts of the country will experience some unstable conditions towards the evening.

The southeastern corner of the South Island will miss out on any stronger winds due to the northwesterly airflow, due to an area of low pressure sitting over that part of the country. For the upper South Island, the front which has moved slowly up the island will pass over, across Cook Strait and onto the North Island by the afternoon or early evening.

A trough then moves onto the South Island during the afternoon and evening. A trough in this instance is caused by very cold air high up in the atmosphere, which will create unstable conditions for some.

The east of the South Island will see some gusty northwesterlies for most of the day, especially for Canterbury and Marlorough, though it will stay relatively sunny with patches of cloud here and there. Marlborough and parts of the Canterbury foothills could see some rainy spells in the afternoon, though these should be quick to clear up.

Further south, Southland, Otago and parts of South Canterbury will also see some isolated showers develping in the afternoon, these could become heavy with some thunderstorms or hail – though again, they should be quick to ease by late evening. Possibly heavy but isolated showers may make their way further north into Canterbury late afternoon / evening but they will be quite coastal.

The West Coast of the South Island will see heavy rain in the morning ease to showers in the afternoon (of course). In the evening, any showers will clear for most, but still continue about Hokitika / Greymouth northwards.

For the North Island, the East Coast has strong northwesterly winds in store, with sunny areas and increasing high cloud, though temperatures will stay reasonably settled. Wellington and Cook Strait will likely see gale strength northwesterlies for much of the day.

It’s looking like cloudy spells for the west of the North Island, with gusty west to northwest winds from Taranaki southwards. Showers move into western regions in the afternoon, possibly becoming heavy for a time in the evening. Showers for Auckland with rain north of the city then clearing this afternoon for a time. Winds will become strong overnight for all western regions.

We had similar in Whangarei this morning, best thunder and lightning for years which shook the house on occasions.

Thunderstorms seemed to have eased now but getting regular heavy showers. All the greenery is looking spectacular with so many different shades of green. Really beautiful.

We’ve had one of the best thunderstorms I’ve seen for years this morning here just south of Waipu. Plenty of forked lightning, most of which crackled and boomed to thunder just after flashing. The air literally felt electric. 42 mils of rainfall since 6 pm last night also gave the ground a good soaking. Nature at its best