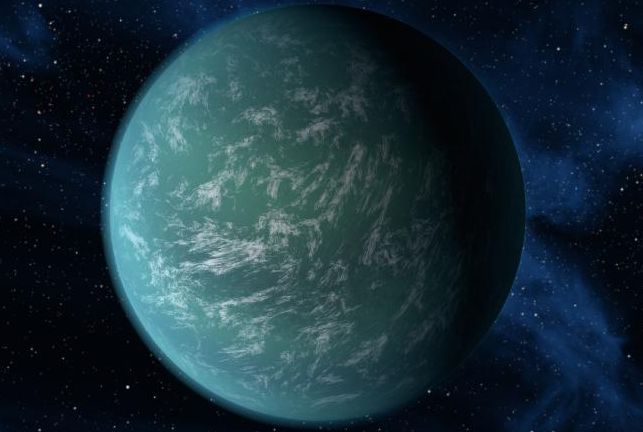 NASA’s Kepler mission has confirmed its first planet in the “habitable zone,” the region where liquid water could exist on a planet’s surface. Kepler also has discovered more than 1,000 new planet candidates, nearly doubling its previously known count. Ten of these candidates are near-Earth-size and orbit in the habitable zone of their host star. Candidates require follow-up observations to verify they are actual planets.

The newly confirmed planet, Kepler-22b, is the smallest yet found to orbit in the middle of the habitable zone of a star similar to our sun. The planet is about 2.4 times the radius of Earth. Scientists don’t yet know if Kepler-22b has a predominantly rocky, gaseous or liquid composition, but its discovery is a step closer to finding Earth-like planets.

Previous research hinted at the existence of near-Earth-size planets in habitable zones, but clear confirmation proved elusive. Two other small planets orbiting stars smaller and cooler than our sun recently were confirmed on the very edges of the habitable zone, with orbits more closely resembling those of Venus and Mars.

“This is a major milestone on the road to finding Earth’s twin,” said Douglas Hudgins, Kepler program scientist at NASA Headquarters in Washington. “Kepler’s results continue to demonstrate the importance of NASA’s science missions, which aim to answer some of the biggest questions about our place in the universe.”

Kepler discovers planets and planet candidates by measuring dips in the brightness of more than 150,000 stars to search for planets that cross in front, or “transit,” the stars. Kepler requires at least three transits to verify a signal as a planet.

“Fortune smiled upon us with the detection of this planet,” said William Borucki, Kepler principal investigator at NASA Ames Research Center at Moffett Field, Calif., who led the team that discovered Kepler-22b. “The first transit was captured just three days after we declared the spacecraft operationally ready. We witnessed the defining third transit over the 2010 holiday season.” 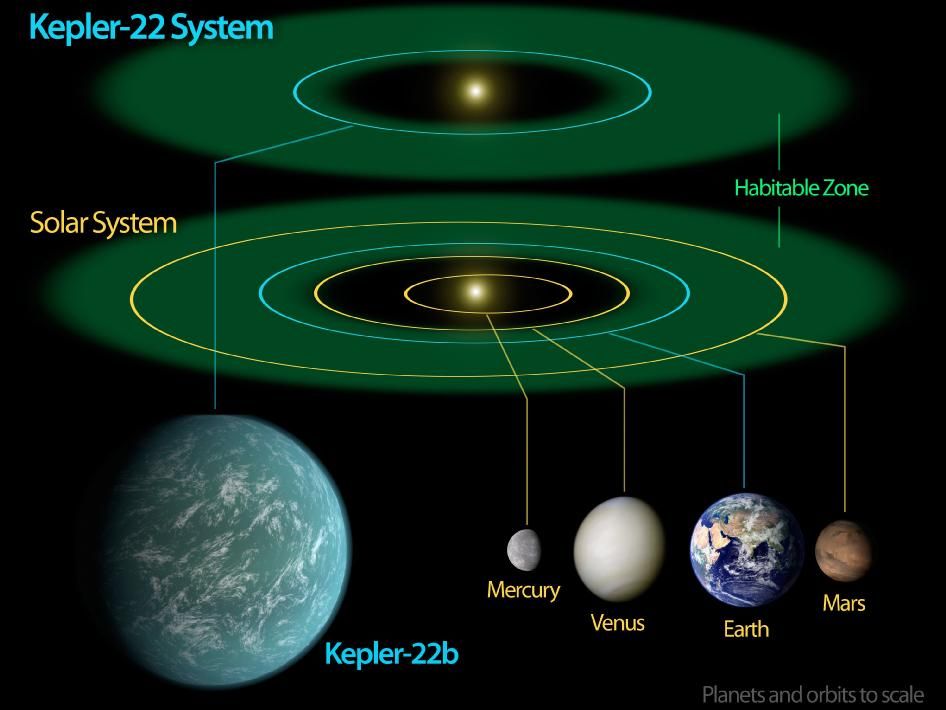 The Kepler science team uses ground-based telescopes and the Spitzer Space Telescope to review observations on planet candidates the spacecraft finds. The star field that Kepler observes in the constellations Cygnus and Lyra can only be seen from ground-based observatories in spring through early fall. The data from these other observations help determine which candidates can be validated as planets.

Kepler-22b is located 600 light-years away. While the planet is larger than Earth, its orbit of 290 days around a sun-like star resembles that of our world. The planet’s host star belongs to the same class as our sun, called G-type, although it is slightly smaller and cooler.

Of the 54 habitable zone planet candidates reported in February 2011, Kepler-22b is the first to be confirmed. This milestone will be published in The Astrophysical Journal.

The Kepler team is hosting its inaugural science conference at Ames Dec. 5-9, announcing 1,094 new planet candidate discoveries. Since the last catalog was released in February, the number of planet candidates identified by Kepler has increased by 89 percent and now totals 2,326. Of these, 207 are approximately Earth-size, 680 are super Earth-size, 1,181 are Neptune-size, 203 are Jupiter-size and 55 are larger than Jupiter.

The findings, based on observations conducted May 2009 to September 2010, show a dramatic increase in the numbers of smaller-size planet candidates.

Kepler observed many large planets in small orbits early in its mission, which were reflected in the February data release. Having had more time to observe three transits of planets with longer orbital periods, the new data suggest that planets one to four times the size of Earth may be abundant in the galaxy.

The number of Earth-size and super Earth-size candidates has increased by more than 200 and 140 percent since February, respectively.

There are 48 planet candidates in their star’s habitable zone. While this is a decrease from the 54 reported in February, the Kepler team has applied a stricter definition of what constitutes a habitable zone in the new catalog, to account for the warming effect of atmospheres, which would move the zone away from the star, out to longer orbital periods.

“The tremendous growth in the number of Earth-size candidates tells us that we’re honing in on the planets Kepler was designed to detect: those that are not only Earth-size, but also are potentially habitable,” said Natalie Batalha, Kepler deputy science team lead at San Jose State University in San Jose, Calif. “The more data we collect, the keener our eye for finding the smallest planets out at longer orbital periods.”

Ball Aerospace and Technologies Corp. in Boulder, Colo., developed the Kepler flight system and supports mission operations with the Laboratory for Atmospheric and Space Physics at the University of Colorado in Boulder.

The Space Telescope Science Institute in Baltimore archives, hosts and distributes the Kepler science data. Kepler is NASA’s 10th Discovery Mission and is funded by NASA’s Science Mission Directorate at the agency’s headquarters

It is irresponsible nonsense and a scandalous waste of public money when there are so many problems on earth, not the least of which are poverty and mass starvation. Who cares if there is water 600 light years away when 80% of all children in third world countries on earth can’t get a drink. If they find something moving it will not be life . Life as WE know it is purely a function of specified sizes of our sun, moon and planets and the very critical distances between their orbits. Change any one small aspect and you change life as we know it.

So how will this knowledge help us? 600 light years is a long way off. There is only 1 habitable planet and that is the one God gave us. It’s the EARTH. Especially created for us.

This is the same curiosity that took us out of our caves, gives us cars, education, computers and weather forecasts. Oh jah, and also science and freedom from religious dogmas.