NASA: Stripe that disappeared on Jupiter coming back 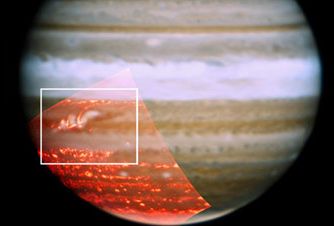 One of Jupiter’s stripes that “disappeared” last spring is reappearing – and the disappearance was apparently an illusion created by Jupiter’s atmosphere, NASA scientists said.

Scientists noticed earlier this year that the longstanding dark-brown stripe, called the South Equatorial Belt, had turned white, essentially disappearing. Researchers with NASA’s Infrared Telescope Facility, the W.M. Keck Observatory and the Gemini Observatory telescope began studying the phenomenon and found the answer likely lies in a cloud deck made up of white ammonia ice that basically obscured the ring.

“Every few decades or so, the South Equatorial Belt turns completely white for perhaps one to three years, an event that has puzzled scientists for decades,” NASA said in a press release.

NASA said that “extreme change” has only been seen on that particular stripe, making it unique for Jupiter and all of our solar system.

“The reason Jupiter seemed to ‘lose’ this band – camouflaging itself among the surrounding white bands – is that the usual downwelling winds that are dry and keep the region clear of clouds died down,” said Glenn Orton, a scientist at the Jet Propulsion Laboratory. “One of the things we were looking for in the infrared was evidence that the darker material emerging to the west of the bright spot was actually the start of clearing in the cloud deck, and that is precisely what we saw.”

For scientists, the development is a step toward understanding more about the planet’s atmosphere. It also marks the first time, according to NASA, that modern instruments have been used to understand the chemical and dynamic changes of the phenomenon.

And it could mean big things for future NASA missions.

“Observing this event carefully may help to refine the scientific questions to be posed by NASA’s Juno spacecraft, due to arrive at Jupiter in 2016, and a larger, proposed mission to orbit Jupiter and explore its satellite Europa after 2020,” NASA said.