NASA -Solar flares something to watch 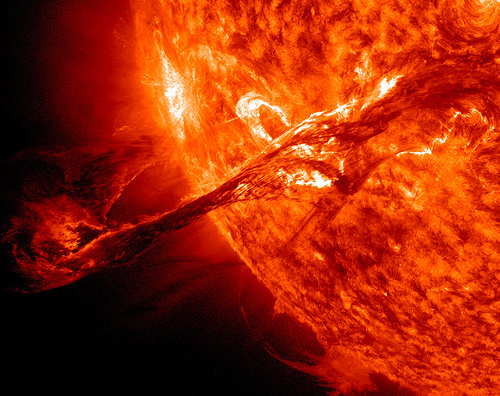 As if we didn’t have enough to deal with looking out for tsunamis, tornadoes and earthquakes, Nasa are now telling us that space weather is at least as big an issue for humanity.

Already this year a huge flare caused a radio blackout on Earth as well as damaging a number of satellites.

The effects we have seen this year are dwarfed by those in the past Nasa points out:

The Carrington superflare of 1859 set fire to telegraph stations in North America and Europe, according to some reports, and sparked Northern Lights as far south as Cuba and Tahiti.

The Quebec blackout of 1989 cut power and heat to millions of people in Canada and caused more than 200 electrical anomalies across grids in the United States.

The Halloween storms of 2003 temporarily disabled instruments on dozens of Earth-orbiting satellites, with some experiencing permanent damage.

Solar flares are unpredictable and can happen at any time making forecasting nigh on impossible.

Solar flares are hard to pick when they will go off, but you can tell by the magnetic polarity of Sun Spots as to the likelihood of them flaring, which means you can track them as to Earth facing, you can then via Enlil Spirals track them to see if they will have an effect on out planet. http://suspicious0bservers.thesyndicate.org.nz/

The site above tracks them regularly and also covers heaps of other space weather issues, such as the Geomagnetic Activity VS The Human Condition.. Covers heaps of stuff, great website! Videos, interactive sites from NASA, NOAA and more!