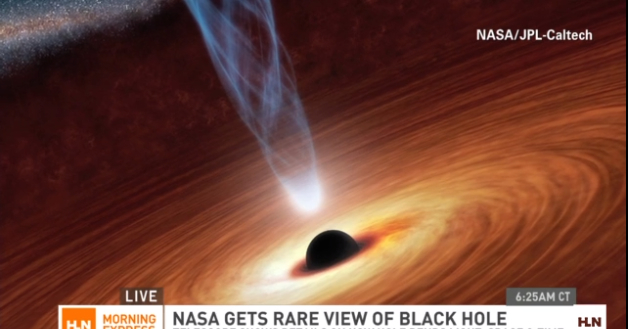 NASA’s black-hole hunting telescope has captured a cosmic battle between dark and light.

NASA says “The regions around supermassive black holes shine brightly in X-rays. Some of this radiation comes from a surrounding disk, and most comes from the corona, pictured here as the white light at the base of a jet. This is one possible configuration for a corona — its actual shape is unclear.”

That light is getting stretched and blurred, and researchers are getting to see it all in unprecedented detail, said NASA in a news release issued today.

In this instance, the corona — a source of X-ray light that sits near a black hole — recently collapsed in toward the black hole that’s named Markarian 335.

The NuSTAR telescope has been collecting X-rays from black holes and dying stars for the past two years.

The craft completed its primary mission earlier this year, and it was redirected to investigate Markarian 335 once scientists noticed that the black hole had become dramatically brighter. NuSTAR observed that Markarian 335’s gravity sucked the corona’s light, an illuminating action that NASA likened to someone shining a flashlight for astronomers.

Scientists can now see the corona “lighting up material around the black hole,” which allows them to study “the most extreme light-bending effects” of Albert Einstein’s theory of general relativity, said NuSTAR’s principal investigator, Fiona Harrison, in the news release. She is with the California Institute of Technology.

As if NuSTAR’s observations and Einstein’s theories aren’t mind-boggling enough, NASA says the black hole Markarian 335 “spins so rapidly that space and time are dragged around with it.”

The space agency says the new observations could help scientists better understand mysterious coronas and black holes, which are thought to be formed when massive stars collapse, creating such density that not even light can escape their intense gravitational pull.

Scientists believe supermassive black holes reside in the centers of galaxies. Some are more massive and rotate faster than others.