NASA counts down to Jupiter mission! 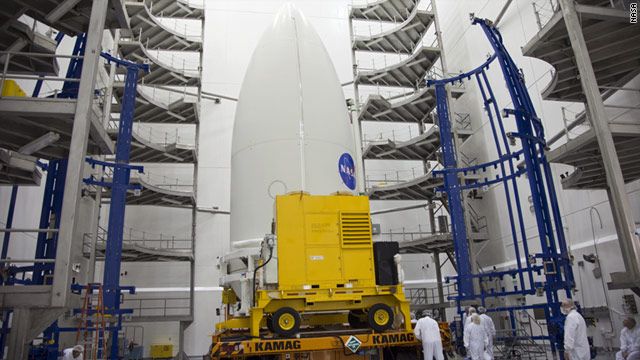 NASA scientists are slightly more than a week away from launching a Jupiter mission they say will unlock key secrets of how our solar system was formed.

After almost a decade of building and testing the Mission Juno satellite — a $1.1 billion spacecraft — NASA officials placed the craft atop an Atlas V rocket Wednesday. It is set to blast off from Cape Canaveral, Florida, on August 5.

Juno will be launched into space atop an Atlas V 551 rocket, one of the world’s most powerful, NASA said.

Mission Juno will offer unprecedented insight into the formation of our solar system by investigating what lies underneath Jupiter’s atmosphere, astronomers said at Kennedy Space Center. Jupiter is known for its violent storms and gaseous atmosphere.

Scott Bolton, principal investigator for the mission, said Jupiter — which is 1,300 times larger than Earth — holds a key to understanding the solar system because it’s believed to be the first planet to have formed after the sun.

“It got the majority of the leftovers after the sun formed,” Bolton said. “We want the ingredient list.”

He added that the mission will investigate, among other things, what lies in Jupiter’s core.

After circling the inner ring of the solar system for two years, the craft will use the Earth’s gravitational pull to sling itself toward the gaseous planet. By 2016, Juno will have traveled the 400 million miles to Jupiter, according to the mission’s website.

Juno’s three solar arrays — each the size of a tractor-trailer — are lined with solar panels that power the spacecraft, Project Manager Jan Chodas said.

The spacecraft will be the first solar-powered satellite to journey as far as Jupiter, Bolton said. Other NASA missions to Jupiter, like Galileo, have used nuclear fuel.

The craft will periodically communicate with NASA engineers on Earth and is programmed to respond to glitches and unexpected trouble, the space site said.

Juno will be followed by other deep-space missions, NASA said.