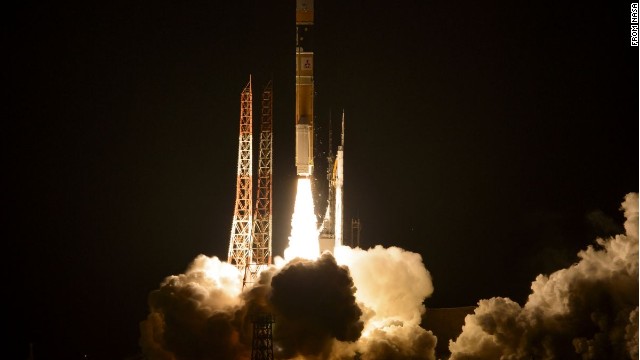 A Japanese rocket roared into orbit early Friday (Thursday afternoon ET) carrying what NASA calls its most precise instrument yet for measuring rain and snowfall.

The Global Precipitation Measurement (GPM) satellite is the first of five earth science launches NASA has planned for 2014. The 4-ton spacecraft is the most sophisticated platform yet for measuring rainfall, capable of recording amounts as small as a hundredth of an inch an hour, said Gail Skofronick Jackson, GPM’s deputy project scientist.

The $900 million satellite is a joint project with the Japanese space agency JAXA, and it lifted off from Tanegashima Space Center at 3:37 a.m. Friday (1:37 p.m. Thursday ET). In a little over a half hour, it had reached orbit, deployed its solar panels and began beaming signals back to its controllers, NASA said.

Also, once fully activated, GPM will use both radar and microwave instruments to detect falling snow for the first time. It will also combine data from other satellites with its own readings, beaming back a snapshot of worldwide precipitation every three hours, Jackson said.

“We can start using the data for all sorts of applications — for floods, for landslide predictions, for tracking hurricanes so we know what part of the coastline to evacuate,” Jackson said.

That data will boost not only immediate storm forecasts, but also aid climate scientists who have been working on long-term models of a changing world.

The craft has enough fuel for at least five years and is expected to last longer — so when combined with earlier missions, it will give NASA an unbroken 25- to 30-year rainfall record, Jackson said.