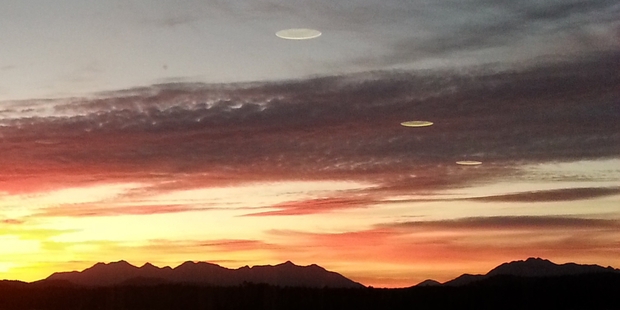 A host of explanations have been offered for a number of ghostly white objects photographed above the Hokitika Airport on Friday morning.

An airport staff member snapped the phenomenon just after 7am.

He had not noticed the circular objects until he checked the photographs on his camera. He took other shots to make sure the discs were not caused by dirt on the camera lens.

Hokitika weather observer Mark Crompton initially said they could be perihelion, or phantom suns, which formed as a result of ice crystals in the atmosphere. However, after viewing the images he said they looked more like the reflection of ceiling lights.

The airport staff member confirmed that the photo was taken outside, away from the windows. 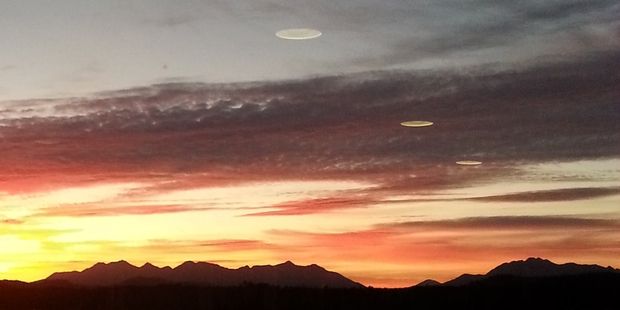 *”It’s clearly just the ceiling lights reflecting?!” – tweeted @PhilipDuncan What do you think? Let us know in the comments below the line

Hokitika Airport is not in Greymouth.

Not even the photographer noticed this apparent apparition at the time, so who are the other ‘baffled observers’?

The scientific name for the weather phenomenon referred to as ‘phantom suns’ (aka sun-dogs), is parhelia (plural of parhelion) – not ‘perihelion’.

Y assumption is these are light reflections. The ohotograoher said she didnt notice them in the sky,vtook a photo and wala. Has,to be reflections, unless she could see them outside with no camera, just eyes.

Looks to be taken from up high… not from ground level. So id say yeah, he was inside and its a reflection of the inside lights against the glass. Unless of course he was standing on the roof outside..

They are my fellow aliens trying to find me

Would it be possible to show more than one photo?  Did the photographer/staff member take photos from different positions?  It would then be interesting to see if the spots are in the same position in the sky or not.

If they were flying (UFO) discs, the reflection of the lighter part would be on the other side (inside tube vs. outside disc). We can see the inside of a tube (ceiling light) with a thin lighter stripe marking where the actual ceiling or end of the tubular shape is.

Looks like reflection of indoor lights if taken through glass window. I’ve managed to get similar effects photographing through train window.

To me.. this looks like a light reflection from window/s  from either inside a building  it is possible to happen even if one stands outside and some distance away from the building window.. We had a similair case  in Auckland standing at chelsea wharf  ( on the MV Union Auckland at the time) taking a photo across the sea and altough we was some distance from the main cheslea building and windows we had similar occurance on our photos.. this look pretty much the same thing.

Hard to tell but reminds me of the huge circular light in the clouds above Moscow a few years back, “official” explanation was it was unusual clouds – utter rubbish was my opinion.