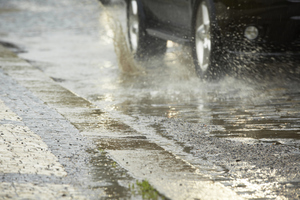 Motorists are being urged to take extra care while driving today, with wet weather hitting most of the country.

The holiday road toll remained at three this morning, triple that of last year.

The average for the last five years, before last year’s record low of just one death, was seven deaths and 127 injuries, Superintendent Carey Griffiths, National Manager of Road Policing said.

“Last year at one was extraordinarily low, and this year so far is still low, but not as low as last year,” he said.

A 10-year-old girl died after she was hit by a motorcycle and killed last night.

The crash occurred on State Highway 30, between Rotorua and Whakatane, in the Bay of Plenty yesterday evening.

The incident occurred about 7.50pm, near Lake Rotoma and the girl, who was a pedestrian, suffered serious injuries.

She was flown to Waikato Hospital by helicopter but died.

At this stage, there was no indication that the motorcycle rider was at fault.

“The girl appears to have run out from the road right into the path of the motorcycle,” Mr Griffiths said.

On Saturday a 75-year-old Tokoroa woman died after her car crossed a centre line and collided head-on with a truck.

The crash happened on State Highway 1 at Lichfield around 1.50pm and police were investigating to establish the cause of the crash.

Keith Davies, 54, died after a crash at Dairy Flat, north of Auckland, less than an hour after the start of the official holiday period.

He was a passenger in car that collided with a truck at the corner of Horseshoe Bush Rd and Dairy Flat Highway around 4.30pm on Friday. His teenage son Richard was at the wheel.

“They have been three quite fundamentally different fatalities, two of them have been cars crossing the centre line but other than that they are all quite different… It is people making mistakes,” Mr Griffiths said.

“It is jut a moment of losing attention and that can be tragic.

“It is easy to tell people to be careful, but people just need to keep their minds on the job when they’re on the road whether they are walking, cycling or driving.”

Mr Griffiths urged motorists to be particularly careful while driving today, with a rain band moving up the country.

“I would urge motorists to take it easy and concentrate fully on their driving. Give a good four seconds following distance double to usual two second rule.

“If people are travelling a little bit more slowly just be aware of who is behind you and if you have impatient drivers behind you pull over and let them pass.”

One person was killed on the roads last Labour Day weekend, 2013, police said.

This was the lowest number of road deaths recorded over a Labour Day weekend since records began.

There were, however, 83 reported injury crashes which left 20 other people with serious injuries, police said.

The official Labour Weekend holiday period began at 4pm on Friday and ends at 6am on Tuesday.