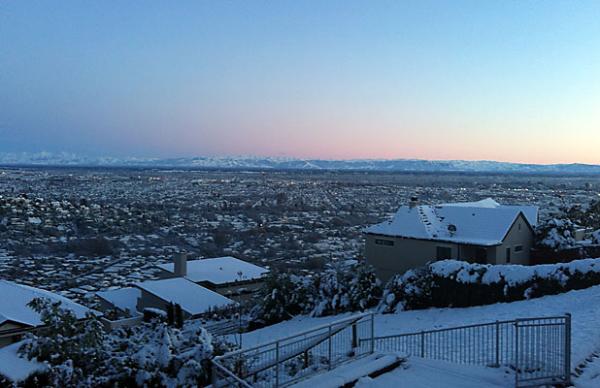 There are very few places on the planet that I think have endured more natural events than Christchurch over the last couple of years.

This week’s snowstorm has just added to the total and once again Cantabrians encountered freezing and snowy conditions with occasional blackouts and major disruptions to travel.

I feel for those who are still awaiting earthquake repairs and are living in damaged homes with draughts and heating escaping throughout numerous cracks.

On the show on Newstalk ZB there were numerous callers who were talking about their power bills and some had no fires anymore after chimneys gave way with only blow heaters to try and keep them warm.

One gentleman called in to say that he goes to bed with his pyjamas, hat and gloves on and he has no heating as his fireplace was damaged and he doesn’t have enough money to buy a heater. The temperature in his lounge was zero he said.

These are the sorts of living conditions that some residents are putting up with and the anger at ECAN and also EQC and Fletchers is obvious and very understandable.

There have been callers asking why do we have a new rugby stadium ahead of broken homes being repaired. That is tough to answer but sport brings a sense of community, of routine, of normality.  The issue however is where should the priorities lie?

The city is broken and although many hearts are heavy, many hold onto hope that one day all will be good again and perhaps in a new way that currently seems out of reach.

The weather events may be severe at times but Cantabriana are a hardy breed and the spirit of the people has not yet been broken.  It appears they are able to tolerate almost anything that Mother Nature can dish out.

The question remains, how much is too much and how long is too long?

“There are very few places on the planet that I think have endured more natural events than Christchurch over the last couple of years.”

Some perspective, please. If you only restrict yourself to thinking of The West, then it may appear that way. There are actually many places on the planet that have endured more natural events than Christchurch over the last couple of years, it’s just they are easy for us to ignore and when they do appear on the news we quickly forget about them.

The safety nets of a functioning, developed nation mean that we are far better prepared to deal with natural calamities than most people in the world. We should be thankful for this. It is not the “hardiness” of the people (something which cannot be proven one way or another) that gets us through difficult times. It is that we are able to get support relatively quickly and effectively. We have a government that is relatively effective and dealing with the fallout and preparing for the future. Notice that I say “relative”!
Think of the rest of the world. And unlike most Kiwis, please don’t think of “overseas” and imagine typical OE places like Europe and Australia. Think of the real world. The world we ignore.

Don’t you think it’s interesting that in the aftermath of the quake, Christchurch used up most available supplies of chemical toilets. At the same time, there are billions of people in the world who have never had access to a toilet. Now are you still so sure of the “hardiness” of the Cantabriana?

some interesting points raised there, Doug. many of which I agree with. we are in a much better position than a lot if countries in similar situations. the whole tone of your comment though, that seems to undermine and dismiss the real struggles that many people in chch are -still- going through, indicates you are not from Christchurch. so perhaps have a true grip on the situation here before you question the ‘hardiness’ of cantabrians for accepting the offer of chemical toilets, and in the same breath as complimenting the support that has been presented.