Mostly settled week ahead, despite cyclone 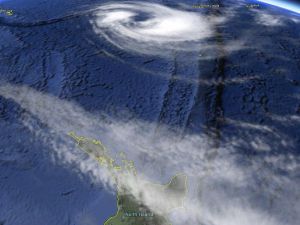 Despite a severe tropical cyclone tracking towards us the week ahead looks set to be mostly sunny, settled and dry predicts WeatherWatch.co.nz.

Cyclone Bune, still category 3, was about 1100kms north east of Northland as of 4:30pm and WeatherWatch.co.nz remains confident that the centre will track about 400 to 600kms offshore at its closest point on Wednesday afternoon or Thursday morning.

Head weather analyst Philip Duncan says if it wasn’t for a large high moving in from the Tasman Sea the forecast would have been quite different.  “There’s little doubt in my mind that Bune would’ve been taking a direct aim on the upper North Island this week had it not been for this high out to the west.  It’s the reason why we’ve said all along that this storm won’t make a direct hit on New Zealand”.

Mr Duncan says WeatherWatch.co.nz still has low confidence that Bune will bring severe weather to those eastern regions but that it can’t be ruled out just yet.

And in the latest Severe Weather Outlook by the crown forecaster on Sunday afternoon MetService is also predicting low confidence of heavy rain for East Cape and Gisborne midway through next week – but also include northern Hawkes Bay and Mahia Peninsula.  The crown forecaster doesn’t anticipate severe gales.

WeatherWatch.co.nz says that dangerous rips and surf will affect the entire eastern coastline of the Norh Island, in particular East Cape to Wairarapa from Monday through until Saturday.

Despite a wet weekend right across the country a strong south west change over the South Island and lower North Island will also ease as we go through Monday, thanks to that large high in the Tasman Sea.

Mostly sunny, calm, weather is in the forecast for much of this week with the next cold front expected to push onto the south west corner of the South Island on Thursday or Friday.

Next weekend is still looking a little uncertain but deep lows in the Southern Ocean may end up pushing windy and wet weather on to some southern and western regions, with dry weather likely along eastern regions and much, if not all, of the North Island.

We’ll have a more detailed weekend forecast in a couple of days.

I so hope you are right…. I would dearly love for the weather to be fine, calm and settled for next week and the weekend of 8/9 April. I am one of thousands competing in the Oxfam 100km trailwalker in Taupo that weekend and fine weather would be fabulous.