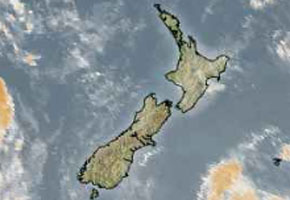 It is mostly settled across the North Island today however showers are affecting western areas from southern parts of Northland down through to Taranaki, a few of which are brief and heavy. Mostly cloudy skies and the odd sunny period otherwise.

Generally settled over the South Island also however there is some cloud about in the east with northeasterly breezes. In the west there are cloudy and sunny periods with a few showers here and there, particularly in parts of Buller and South Westland.

Showers should mostly clear in the west of the North Island this evening although there may be one or two remaining. Showers are likely to increase about the West Coast of the South Island in the evening.

Temperatures are currently averaging 15 in most parts of the upper North Island and along the east coast. 13 degree readings are currently coming from Wellington and the Central North Island. Temperatures are quite pleasant across the upper South Island also in the mid teens, south of Canterbury however high’s are getting to 12 or 13 degrees, a little cooler in Central Otago on 10 or 11 degrees.