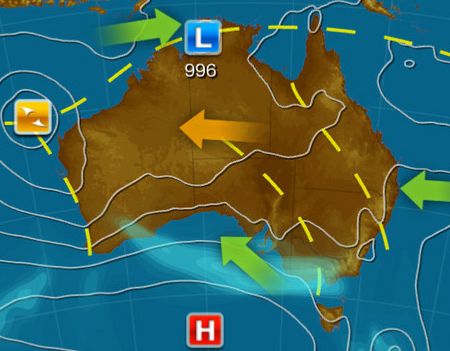 Widespread 25 to 50 millimetres is likely from now through to Saturday night as a rainband laden with moisture from Tropical Cyclone Dianne crosses the state.

“Some significantly heavier falls are likely due to the amount of moisture in the air. There is potential for near 100mm, most likely on Yorke Peninsula and the Mount Lofty Ranges, including the Adelaide Hills,” Weatherzone meteorologist Dutschke said.

“Some areas, including Adelaide have a good chance to get their biggest February rain since 1974.” Dutschke said.

“Some flooding is almost inevitable, but not like early December when big thunderstorms brought 70 to 130mm in less than a day.”

“This rain will generally be steady and persistent with little chance of extremely heavy downpours.”

For Adelaide, rain will start tonight and be at its heaviest on Friday, most likely in the afternoon and evening.

The timing is not ideal. Most do not need this much rain in summer, especially grape growers.

Lucky for most, it has been a relatively dry season so far, compared to what has been happening in eastern states.

Another reason for grape growers to be nervous is the rising humidity.

“Humidity will also be very noticeable, right across the state. It will steadily rise above 80% within the next 24 hours,” Dutschke said

A cooler, drier westerly change will arrive on Saturday causing most rain to clear.

“This could be the last significant rain for a while. Apart from a few light showers we may get through to autumn before it rains again.”