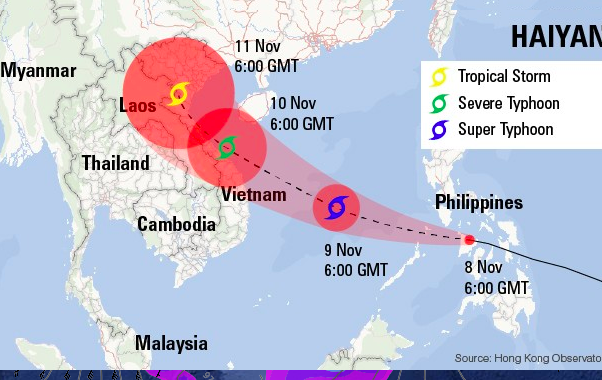 EXTENSIVE REPORT VIA CNN — More than 100 people were killed in a major Philippine coastal city that took the brunt of Super Typhoon Haiyan, authorities said Saturday.

That death toll in Tacloban was the first significant casualty report in a day when authorities began surveying the devastation of a typhoon that has been described as perhaps the strongest storm ever to make landfall in recorded history.

Capt. John Andrews, deputy director of the Civil Aviation Authority of the Philippines, told CNN that he received a radio report from the Tacloban airport station manager who said there are more than 100 bodies in the street in Tacloban and more than 100 people injured.

Traveling aboard a military cargo plane from Manila, CNN’s Paula Hancocks was among the first journalists to see the catastrophe in Tacloban on Saturday.

“It looks as though a tsunami swept through here,” she said by satellite phone.

The airport terminal was “completely destroyed,” and shell-shocked Filipinos were gathering around the airport with the anticipation that the military was bringing food, water and medicine, Hancocks said.

Every trees was flattened or snapped in half, and the timber landed on roads, blocking transportation, she said.

“You assume as you go inland you’ll find more people who are injured or who have lost their lives,” Hancocks said.
From the plane, she said, “you could see a lot of groundwater on the land itself, and pretty much every single tree was damaged.

“That showed the sheer force of the surge and the wind,” she said. “On the ocean front, you can see the defenses were damaged.”

In a separate report earlier Saturday, as reports began coming in to authorities, the National Disaster Risk Reduction and Management Council indicated at least four people were killed. At least seven people were hurt, and four people were missing, the council also said Saturday.

The destruction is expected to be catastrophic. Storm clouds covered the entire Philippines, stretching 1,120 miles — equal to a distance between Florida and Canada. The deadly wind field, or tropical storm force winds, covered an area the size of Montana or Germany.

The typhoon first roared onto the country’s eastern island of Samar at 4:30 a.m. Friday, flooding streets and knocking out power and communications in many areas of the region of Eastern Visayas, and then continued its march, barreling into five other Philippine islands.

Then, predawn Saturday, it headed toward Vietnam.

Haiyan weakened Saturday and was no longer a super typhoon, rather a typhoon with sustained winds of 130 mph.

But the storm could return to super typhoon status Saturday. The center of Haiyan will land again Sunday morning near the Vietnamese cities of Da Nang and Hue.

Philippine military helicopters were scheduled to take aerial surveys of the damage Saturday. Relief agencies in Manila were expected to begin traveling as long as 18 hours to reach the worst hit isles. Meanwhile, Haiyan was over the South China Sea on Saturday.

While delivering 315km/h winds with gusts reaching even 380km/h, Haiyan first landed near Dulag and Tacloban, flooding those coastal communities with a surge of water rising 12m to 15m, said CNN’s Chad Myers.

Tacloban is the largest city in the Eastern Visayan Islands and was an important Allied logistical base during World War II, even serving as a temporary capital of the Philippines. But on Saturday, Tacloban was considered as among the areas worst hit by Haiyan, and authorities and relief agencies had no immediate information about its condition.
For purposes of comparison, Super Typhoon Haiyan packed a wallop on Philippine structures 3.5 times more forceful than the United States’s Hurricane Katrina in 2005, which directly or indirectly killed 1,833 people and was the costliest hurricane in U.S. history at $108 billion, Myers said.

“Having so recently had my own visit to the Philippines prevented by another powerful storm, I know that these horrific acts of nature are a burden that you have wrestled with and courageously surmounted before. Your spirit is strong,” Kerry said.

The Philippine Coast Guard reported 3,398 people were stranded on multiple watercraft early Saturday morning.
Winds unlike any other

After the storm passed over his family’s home in Cebu City, Chris Ducker told CNN by phone Saturday that his family was safe, but “it’s been quite a harrowing day to say the least.” Part of his roof was ripped off, leaking water, he said.

“The first thing I noticed straightaway as soon as my eyes opened was the howling of the winds around the house,” said Ducker, whose home is in the mountains with a 360-degree view.

“I’ve never experienced winds like this in my entire existence. I’ve lived in this country for 13 years and I’ve been through a few earthquakes, I’ve been through plenty of these storms. We get hit quite regularly with storms, as you probably already know. But, yes, this was something else. The rain, when I looked out of the window, the rain wasn’t falling. The rain was being pushed almost at, you know, a 100-degree angle right in front of our house. It was pretty incredible,” he added.

Most of the Cebu province couldn’t be contacted by landlines, cell phones or radio Saturday, said Dennis Chiong, operations officer for the province’s disaster risk and emergency management.

Among the early reports is how one inaccessible town, Daanbantayan, has more than 3,000 residents who “badly need food, water and shelter because most of the houses there are damaged due to the storm,” Chiong said.

The town of Santa Fe in Cebu saw 20% to 30% of its residents losing their houses, but officials weren’t able to determine fatalities because roads were washed out and phone service was down, information officer Marvin Camay said on the province’s Facebook page.

Defenseless against the storm’s might
On Bohol Island, power was still out Saturday, but cell phone coverage was restored and damaged roads were being reopened, said one relief worker.

But the big concern was how did the typhoon impact the island’s 350,000 people living in tents and temporary shelters since last month’s earthquake, said Joe Curry of Catholic Relief Services on Bohol.

“This one was incredibly intense and big,” Curry told CNN. “The strength of this typhoon is phenomenal and the way it moved across the Philippines is something of serious concern.”

He feared that the hardest hit islands will experience the most fatalities.

“Those are the ones that will have the most loss,” Curry said. “There are a lot of rural areas, a lot of small islands that are affected. We don’t know how they can protect themselves from a typhoon of this strength.”
Clarson Fruelda, of Cebu City, said residents were cleaning up dirt, leaves, coconuts, and tree branches from their homes Friday afternoon, when the storm had passed. A CNN iReporter, she described the Filipino spirit as “waterproof.”

“The winds were the strongest that I felt in more than 20 years,” Fruelda told CNN. “These past few weeks were really tough for my wife and I and probably for Cebuanos as well since it was just a few weeks ago when we were hit by a 7.2 magnitude earthquake.

The state-run Philippines News Agency, citing unconfirmed TV reports, said “around 20” people drowned after a storm surge struck Friday morning in Palo, a town on the island of Leyte, which abuts Samar.

“Most of the fatalities sustained massive injuries in the head and upper part of the body, indicative that strong waves dashed them against hard objects,” it reported, adding that nine of the dead were minors.

Experts predicted the casualty toll would soar once aid workers get to the hardest-hit areas, many of which were totally isolated — no phone service, no electricity.

About 125,000 people took refuge in evacuation centers, and hundreds of flights were canceled.
With sustained winds of 195 mph (315 kph) and gusts as strong as 235 mph (380 kph), Haiyan may be the strongest tropical cyclone to hit land anywhere in recorded history. It will take further analysis after the storm passes to establish whether it is a record.

The Saffir-Simpson Hurricane Wind Scale describes winds of 157 mph (252 kph) or higher as capable of causing catastrophic damage. “A high percentage of framed homes will be destroyed, with total roof failure and wall collapse.

Fallen trees and power poles will isolate residential areas. Power outages will last for weeks to possibly months. Most of the area will be uninhabitable for weeks or months.”

Haiyan was on a westward track when it raced into Samar traveling at 25 mph (41 kph), which meant the worst was over quickly. But the damage was severe. “About 90% of the infrastructure and establishments were heavily damaged,” Gwendolyn Pang, the secretary general of the Philippine National Red Cross, told CNNI.

By early Saturday, the speed had dropped slightly, to 23 mph (37 kph).

About 25 areas in the Philippines were hit, Pang said, adding that assessment teams were prepared to enter the stricken areas as soon as conditions allowed.

But they cannot do it alone, she said: “We will be definitely needing more support for this one.”

Floodwater was as high as 10 feet in some areas.

Maryann Zamora, a field communications specialist for the charity World Vision, said her organization “has been working through so many disasters, so many typhoons — but this is quite different.”

“This is the strongest I ever felt so far,” she said by phone from the island of Cebu.

Haiyan, known in the Philippines as Yolanda, retained much of its force as it moved westward Friday with sustained winds of 295 kph (183 mph), which put it well above the 252 kph threshold for a Category 5 hurricane, the highest category on the Saffir-Simpson scale.

Video showed streets flooded with debris and sheets of metal flying through the air.

Gov. Roger Mercado of Southern Leyte, a province in Eastern Visayas near the storm’s path, said Friday morning that fallen trees had made all roads impassable. “We don’t know the extent of the damage,” he said. “We are trying to estimate this. We are prepared, but this is really a wallop.”

With sea travel suspended in many areas, more than 3,000 travelers were stranded in ports, the council said.
Meteorologists said it maintained super-typhoon intensity throughout its passage over the Philippines. A super typhoon has surface winds that sustain speeds of more than 149 mph (240 kph) for at least a minute, according to the U.S. National Oceanic and Atmospheric Administration.