More solar storms on the way 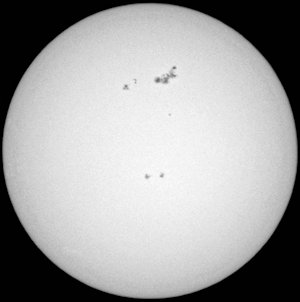 The sun is continuing its active streak this week, firing off another solar flare late Thursday (March 8) from the same region that produced this week’s strong solar storm.

An M6.3-class solar flare — a mid-range eruption — spewed from the surface of the sun last night at 10:53 p.m. EST (0353 GMT March 9), according to an alert from the Space Weather Prediction Center, a joint operation by the National Oceanic and Atmospheric Administration (NOAA) and the National Weather Service.

Space weather scientists use five categories — A, B, C, M and X — to rank solar flares based on their strength and severity. A-class flares are the weakest types of sun storms, while X-class eruptions are the most powerful.

“When you take overall intensity and length — how long it persisted — we’re confident in saying by some measures, it was the strongest storm we’ve seen since November 2004,” Rutledge said. “That doesn’t mean that between November 2004 and today we haven’t had brief periods that were more intense. If you look at the storm overall for length and strength, it was the strongest storm since November 2004.” [Photos: Solar Flare Eruptions of 2012]

A fast-moving cloud of solar plasma and charged particles, called a coronal mass ejection, was triggered by the Tuesday X-class eruptions, and this wave of energetic particles hit Earth yesterday. The resultinggeomagnetic storm was weaker than expected, but solar physicists say there is a potential for conditions to escalate.

“We still have about a 40 percent chance of seeing another X flare,” Rutledge said. “We still think it’s fairly likely to see one later today, tomorrow or the next day. We’re watching this region closely.”

A coronal mass ejection from last night’s flare is also approaching Earth, and while this one is expected to hit Earth directly on Sunday (March 11), experts at the Space Weather Prediction Center are not anticipating the effects to be very severe.

“[It] could cause storming levels that could reach the G3 (strong) level again, but we don’t believe it will have quite the sustained intensity,” Rutledge said.

Still, the massive sunspot region shows no signs of quieting down, and earlier today, NASA scientists said that it also appears to be growing.

With this sunspot region now facing Earth, at the central meridian of the solar disk, strong solar eruptions have the potential to wreak havoc on the planet. Big coronal mass ejections that hit Earth head-on can potentially knock out power grids and disrupt other electronics infrastructure. Strong solar storms can also disrupt satellites in space and pose radiation risks for astronauts aboard the International Space Station.

This week’s solar storm increased levels of solar radiation and caused geomagnetic storms on Earth, but the effects were milder than expected. As a precaution, commercial airliners re-routed flights over Earth’s polar caps, but no other major disruptions were reported, Rutledge said.

Solar storms can also amp up displays of the northern and southern lights, enabling people to see them farther south than normal. Yesterday, skywatchers reported seeing auroras from states such as Wisconsin, Michigan and Washington, Rutledge said.

But without any additional eruptions from the sun, and as this week’s solar storm begins to taper off, the supercharged aurora displays will begin to decrease around the globe, he added.

The sun appears to be coming out of an extended lull in activity in its 11-year cycle. The current cycle is known as Solar Cycle 24 and solar activity is expected to ramp up toward its peak in 2013, NASA officials have said.