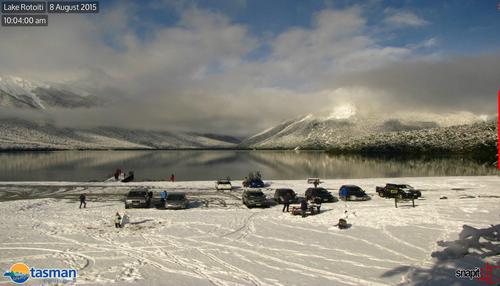 It’s going to be another cold start for Tuesday around the country, with a large high pressure system over the South Island, and a southerly airflow over the North Island.

There’s likely to be severe frosts for the in the morning in some South Island areas, and to a lesser extent overnight.

The North Island is off to a chilly start too – not as bad as the South, but still cold – in or around zero degrees for anywhere sheltered.

Snow flurries are agian likely for Wellington right through to Hawke’s Bay and Gisborne – nothing too heavy or sustained, but snow is snow!
It’s also looking likely to blow strongly from the south to southwest right on the East Coast of the North Island, though these will stay pretty isolated.