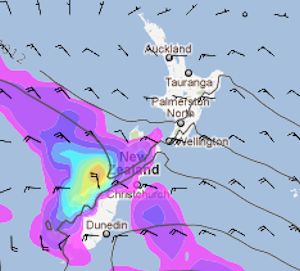 Another week, another cold front, another round of rain for New Zealand.

On Tuesday, the front will slide on shore on the deep south of the South Island.  Rain is likely to spread into Invercargill and Gore before most folks have breakfast.  Dunedin could see rain by midday.

As the day wears on, the front and it’s associated precipitation move north.  The thing we need to watch for is the possibility that some of that rain could be come heavy Tuesday night into Wednesday afternoon.  The area under the biggest threat for that is the West Coast and the northwestern section of Nelson.

The front will lose its punch as it moves north Wednesday night into Thursday.  It should still be enough of a kick to the atmosphere to pop off a rain and few showers for the North Island though.

Things start to clear out by Friday and it looks like both islands should have a pretty decent start to next weekend.  A few showers could do the South Island on Sunday.

Bother, no mention of rain in the forecast today for Christchurch but out here in Weedons we have had persistant rain falling for the past twenty minutes.

So the rain will reach the southern South Island early Tuesday instead of late afternoon as per Metservice’s forecast??

Yeah, I may have to pull back a bit on the rain.  The drier air is going to be tough to overcome in the early part of the day.