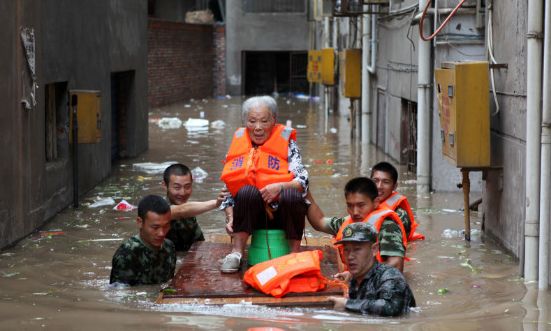 More rain was forecast for flood-hit Beijing Wednesday, as residents continued clearing debris from the weekend deluge amid signs government censors were doing their own mop-up job on social media.

On Saturday, the heaviest rain in 60 years overwhelmed Beijing’s drainage system, submerging cars, houses and provoking online anger over the government’s lack of preparation and response.

Early Wednesday, it appeared that the disaster may have claimed the jobs of two of the city’s most senior officials. However, neither resignation of the Beijing mayor or vice mayor were officially linked to the flood response.

In fact, observers said the resignations could be part of routine leadership reshuffle. Media reports said the city’s legislature is now in session and its agenda includes appointments and dismissals.

However, soon after state media reported the resignation of Beijing mayor Guo Jinlong and vice mayor Ji Lin, comments about their departure on China’s Sina Weibo were being blocked and deleted.

State media gave no reason for the resignation of vice mayor Ji Lin. However, it said mayor Guo Jinlong had stepped down following his election as secretary of the Beijing Municipal Committee of the Communist Party of China (CPC) on July 3.

Wang Anshun, the vice Party chief of Beijing, has been appointed as vice mayor and acting mayor, Xinhua said.

The departure of two of Beijing’s most senior officials comes just four days after the heaviest rain in 60 years submerged large parts of the Chinese capital.

On Sunday, state media put the official death toll in Beijing at 37. However, amid the barrage of online criticism about the government’s response to the disaster, speculation swirled that the figure could be much higher.

Across the country, 111 were declared dead and 47 missing. Nine million people had been affected, state media said.

On Tuesday, spokeswoman Wang Hui told reporters that the government was not concealing the true death toll and that updated figures would be released as soon as they’re known.

“I want to say I hope everyone will not speculate that the Beijing government is hiding the death toll,” said Wang, according to the Associated Press.

“Doing the inspection work is not easy. Do believe us that we will speak the truth,” she said. “If there are new figures we will immediately tell you.”

In the immediate aftermath of the disaster, comments on Weibo exposed the anger many Beijingers felt about the inability of their city’s infrastructure to cope with the downpour.

The Beijing-based media group, Caixin wrote: “Why is this happening once and again? Year after year Beijing faces the same challenge, not even hosting the Olympics can provide a solution. That’s how vulnerable our capital city can be.”

Another user, chuntiangushi, wrote: “We can host the most luxurious Olympics and send satellites into space but can never seem to fix this drainage system. What a shame.”

Others were angry that there were no emergency warnings, nor government shelters or special hotlines to offer flood advice.

Their ire was further stirred by an announcement Tuesday that Beijing would launch a “large” fundraising campaign, to which local citizens would be encouraged to donate for disaster relief.

“Donation again? I won’t give them a penny. I’m already paying tax. What did you do with my money?” one user wrote. Another said: “Chinese government is wealthy enough to help Africa, the Philippines and North Korea but they don’t have the money to help its own people get over the disaster.”

More rain was forecast to hit Beijing late Wednesday to Thursday morning, Xinhua reported, adding that more than 50 millimeters of rain could fall on the eastern parts of the city.

A yellow alert — the third highest on a scale of five — had been issued for the districts of Fangshan, Mentougou, Huairou, Pinggu and Shijingshan, as well as Miyun county, which are at risk of mudslides and cave-ins, Xinhua said.

Saturday’s downpour caused chaos across Beijing, submerging 84 cars along a 900-meter stretch of the Beijing-Hong Kong-Macau expressway. The road reopened to traffic around midday Tuesday after hundreds of rescuers spent two days pulling the cars out.

A team of 10 divers worked for 10 hours straight to check the cars for occupants, Xinhua said, adding that they found three bodies.

Disaster relief efforts were still underway in the worst hit district of Fangshan Wednesday, according to state media Xinhua, which published images of upturned cars and mud-soaked homes.

– Click here to see photos of the floods, via CNN